Important folk artist was kidnapped as a boy on River Street in 1882, 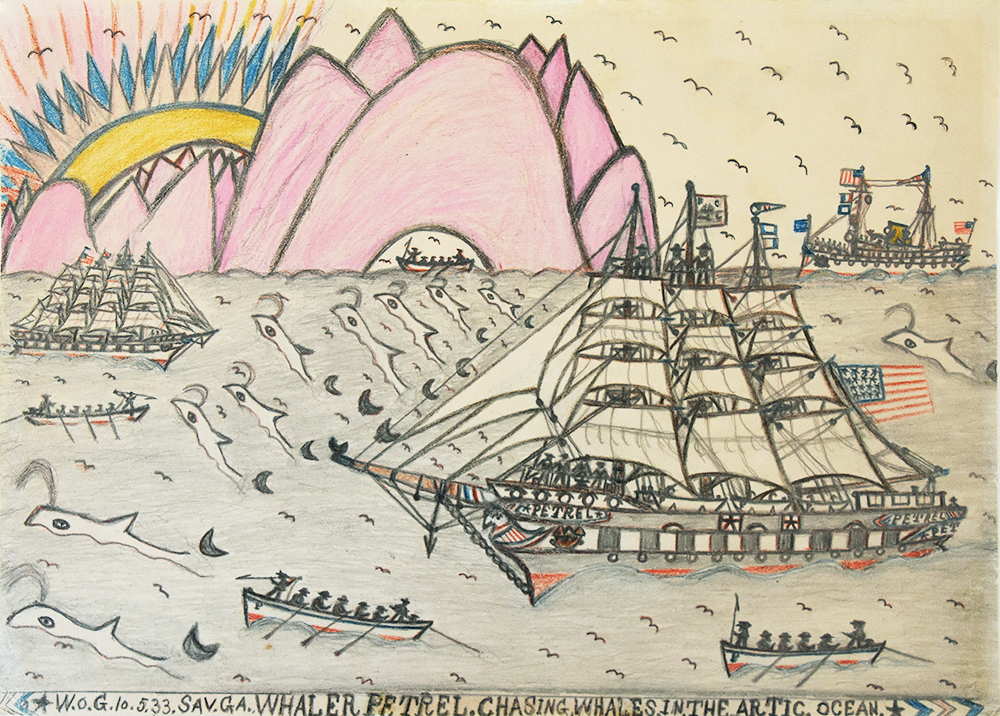 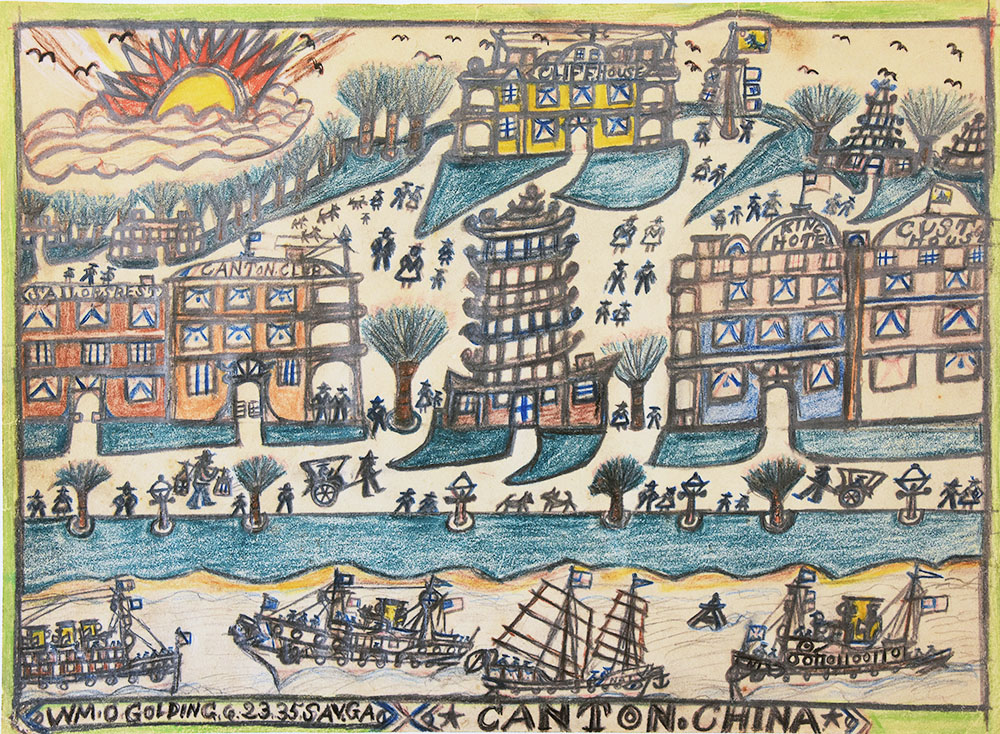 SAVANNAH, GA (October 6, 2020) — Telfair Museums has acquired 17 drawings by important American folk artist William O. Golding (1874- 1943), giving the museum one of the two largest collections of his work in the world.

Golding created the 17 maritime drawings in his signature pencil-and-crayon style from 1932 through 1939, during his time as a patient at the U.S. Marine Hospital in Savannah. The newly acquired drawings include a diverse cross-section of Golding’s travels and experiences, depicting sail and steamships, whaling vessels, a Chinese port, the Rock of Gibraltar, Cape Horn, France, and Tahiti—and possibly the artist’s only known self-portrait.

“We’re excited to acquire the largest known group of remaining works by Golding, which span his entire active period and the full gamut of his subject matter,” said Harry DeLorme, Telfair’s senior curator of education, who is in the process of organizing a large exhibition of Golding’s work that will debut in 2022. “This collection will be an invaluable resource as we research his work and bring his amazing art and story to a wider audience.”

Telfair’s permanent collection already included four of Golding’s works, bringing the museum’s holdings to 21 of the about 100 drawings he is thought to have produced. Others are in the collections of the Smithsonian American Art Museum, the American Folk Art Museum in New York, and the Morris Museum of Art in Augusta.

“His drawings tell a story of maritime history as seen by a black seaman who left Georgia not long after Reconstruction, spent decades laboring at sea, and made his art at a time when self-taught art was emerging in American culture,” DeLorme said.

The son of an African American lawmaker from Liberty County, Georgia, Golding was shanghaied from the Savannah waterfront—while walking with a friend on River Street—at age 8 in 1882 to serve as a cabin boy on a Canadian vessel. He spent decades circling the globe on a variety of sailing and steamships, from a whaler to a Man-O-War. In the 1930s, after almost 50 years of seagoing, Golding was a patient in Savannah, receiving treatment for chronic bronchitis. Margaret Stiles, the U.S. Marine Hospital’s recreation director and a member of the Savannah Art Club, encouraged Golding, who drew from memory fantastical, detailed scenes of ports he claimed to have visited during his journeys across the globe.

Nicknamed “Deep Sea” by fellow patients, Golding enjoyed sharing stories of his time at sea, noting he “never accumulated any fortune but hard knocks, hardships, and lots of experience.” His expressive drawings transform the tradition of ship portraits in a lively style brimming with visual inventions unique to the self-taught artist.“

Like our Kahlil Gibran and Kirk Varnedoe collections, this acquisition of Golding’s works represents a true legacy at Telfair,” said Courtney McNeil, chief curator and deputy director for curatorial affairs. “That it’s devoted to an African American artist who developed his style here and called Savannah home makes it that much more special.”

The works will be featured in the Telfair-organized exhibition Hard Knocks, Hardships, and Lots of Experience: The Maritime Art of William O. Golding—the largest-ever presentation of Golding’s works at a museum—which will debut at the Jepson Center in 2022 before traveling to other museums.

Opened in 1886, Telfair Museums is the oldest public art museum in the South and features a world-class art collection in the heart of Savannah’s National Historic Landmark District. The museum encompasses three sites: the Jepson Center for the Arts, the Owens-Thomas House & Slave Quarters, and the Telfair Academy. For more information visit telfair.org.