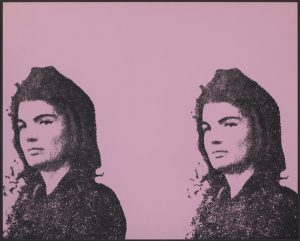 To coincide with the 50th anniversary of the assassination of President John F. Kennedy this November, Telfair Museums presents Warhol/JFK: November 22, 1963, a thought-provoking exhibition that explores the events of that defining moment in history from the perspective of one of America’s most important modern artists, Andy Warhol.

On view are two bodies of work created by Warhol: a 1966 double portrait of the grieving widow Jacqueline Kennedy, Jackie II, and the rarely seen print portfolio Flash–November 22, 1963, which is comprised of a series of 11 screenprints with text that replicates newswire copy from the assassination and its aftermath. A private collector provided the works on special loan to Telfair Museums.

The nation’s collective obsession with JFK’s assassination was a source of constant creative output for Andy Warhol, who was fascinated by the potent combination of celebrity and tragedy. He began his series of “Jackie paintings” in response to the media blitz that followed the incident. He chose photographs used in media accounts before and after the event and cropped them to focus on the president’s widow, Jacqueline Kennedy.

He created the Flash–November 22, 1963 portfolio of prints in 1968 to depict the continuing media spectacle surrounding JFK’s assassination. Warhol named the portfolio for “news flash” Teletype texts that reported the assassination and its aftermath—the first major news event played out live on TV. The Flash portfolio includes a series of eleven silkscreens depicting a grinning president, a presidential seal with bullet holes through it, and other symbolic representations of that tragedy. The portfolio’s cover includes an image of the New York World-Telegram front page with the headline “President Shot Dead.” Warhol uses screenprinted Teletype texts as “wrappers.”

Warhol’s use of media images and text underlines the notion that our collective understanding of the images is a result of a media construction and not our own personal emotional response. Fifty years later, the powerful role the media has to describe and shape public understanding of current events remains relevant.

ABOUT ANDY WARHOL (1928-1987):
Andy Warhol’s name is synonymous with American Pop Art. Born in Pittsburgh, Pennsylvania and raised in McKeesport, Pennsylvania, Warhol studied art at the Carnegie Institute of Technology. He is best known for his iconic screen prints of commercial objects like Campbell’s soup cans and Brillo pads and for his portraits of celebrities like Jackie Kennedy, Elvis Presley and Marilyn Monroe. ARTnews magazine has named him one of the 25 most influential artists.

For California art collectives T.R. Uthco and Ant Farm, the iconic event that signified the ultimate collusion of historical spectacle and media image was the assassination of President Kennedy in 1963. This restored video begins with an excerpt from the only filmed record of Kennedy’s assassination: Super-8 footage shot by Abraham Zapruder, a bystander on the parade route. Using those infamous few frames of film as their starting point, the artists construct a multi-leveled event that is simultaneously a live performance spectacle, a taped re-enactment of the assassination, a mock documentary and, perhaps most insidiously, a simulation of the Zapruder film itself. Performed in Dealey Plaza in Dallas — the actual site of the assassination — the re-enactment elicits bizarre responses from the spectators, who react to the simulation as though it were the original event.

On the eve of the anniversary of the JFK assassination, Telfair presents a lecture by Dr. Bruce Mallard, who will discuss the assassination and the role of the media in public perception of the event. Dr. Mallard is an instructor of Political Science at Armstrong Atlantic State University.