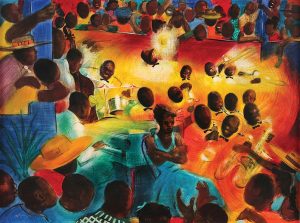 The art scene in Harlem from 1919 to approximately 1940 provided a creative haven for African Americans and encouraged a melding of art, music, literature, and poetry, giving rise to the term “Harlem Renaissance.” The Visual Blues explores the rich interaction between the visual artists of the Harlem Renaissance and the wealth of blues and jazz music emanating from the Deep South and moving north. Artists and musicians of the period blurred artistic boundaries, drawing inspiration from each other and often contributing to one another’s art forms. 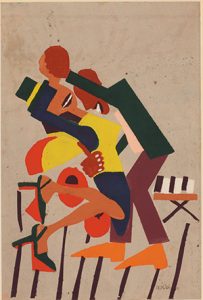 The Visual Blues exhibition comprises fifty-two paintings, drawings, prints, photographs, and sculptures, illustrating the unprecedented outburst of artistic creativity during the Harlem Renaissance that was inspired by blues and jazz, dance and social clubs.

By the 1920s, many Southern musicians had moved to Northern cities, bringing with them the new rhythms and poignant lyrics of Southern black music. Alongside such illustrious musicians as Cab Calloway, Billie Holiday, and Duke Ellington, Southern African American artists performed at famous nightclubs in Harlem, including the Savoy Ballroom, the Apollo Theater, and the Cotton Club. The culture of the Harlem Renaissance fostered friendships and collaborations among artists of many disciplines. A wide circle of performers, poets, playwrights, and painters socialized and lent support to one another.

With paintings on loan from the Metropolitan Museum of Art, the Houston Museum of Fine Arts, and the Smithsonian American Art Museum and National Portrait Gallery, this exhibition presents a rare opportunity for audiences to learn about the lives and careers of many artists—some of whom, such as Jacob Lawrence and Romare Bearden, are well known, and others whose reputations have been submerged over time.

Organized by the Louisiana State University Museum of Art.

The Visual Blues Free Family Day and Concert
Saturday, March 7, 1–4 pm
Explore the creativity of the blues, jazz, and the Harlem Renaissance in this day of activities for all ages. Make a collage inspired by the art of Romare Bearden and learn dances of the period. Enjoy a 3pm concert by the legendary guitarist and blueswoman Beverly “Guitar” Watkins and the King Bees. Admission is free, thanks to project funding from the City of Savannah Department of Cultural Affairs and Georgia Power Foundation, Inc.

Lecture by Dr. Michael Benjamin
Monday, April 13, 6pm
Armstrong State University Professor Dr. Michael Benjamin presents “The Harlem Renaissance: Its Time, its Place, and its Blues,” an illustrated public history, exploring the the movement at the center of The Visual Blues exhibition. 6pm at the Jepson Center.