In September, the Telfair’s Kahlil Gibran holdings made their Jepson Center debut in the Varnedoe and Levitt Galleries. This ever-popular collection of drawings, watercolors, and paintings by the Lebanese-born, visionary artist and writer Kahlil Gibran (1883-1931) spans his career-with works from his first exhibition at photographer Frederick Holland Day’s studio in Boston in 1904 to art created during the last years of his life. In addition to providing a survey of Gibran’s career as a visual artist, the show documents his relationship with his patron Mary Haskell and substantiates his literary career with examples of several drawings and watercolors used as illustrations for six of his English-written books. The exhibition will also include photographs of Gibran and his New York studio, as well as a portrait of the young artist painted by Lilla Cabot Perry.

Best known for authoring The Prophet, a collection of short, philosophical essays that became one of the top-selling books of the twentieth century, Gibran immigrated to Boston with his family in 1895 at the age of twelve. Through a fortuitous series of events stemming from the recognition of his creative talents at a local settlement house, the aspiring artist met Mary Haskell, the headmaster of a Boston girls’ school. The two formed an important, lifelong relationship that culminated in Haskell’s patronage and provided Gibran with the security to pursue his career. In 1950, Haskell (who became Mary Haskell Minis in 1926) donated her personal holdings of nearly one hundred works of art by Gibran to Telfair Museums, which now possesses the largest collection of Gibran’s artwork in the United States.

The show The Art of Kahlil Gibran will be held in celebration of the book of the same name, to be released this fall. The 100+-page, hard-cover publication documents the Telfair’s substantial holdings of Gibran’s work-providing new research and rare insight into the artist’s life, his pivotal relationship with Mary Haskell Minis and the development of her Gibran collection, as well as the artist’s visual creations.

Including two essays, historical photographs, and more than eighty color reproductions of Gibran’s artwork, the book will serve as a valuable contribution to the existing scholarship on this important literary and artistic figure. Distributed by the University of Georgia Press, The Art of Kahlil Gibran is a collaboration between Telfair curator Tania Sammons-who has studied Gibran, his art, and patron Mary Haskell Minis-and Dr. Susheil Bushrui, the University of Maryland’s George and Lisa Zakhem Kahlil Gibran Chair for Values and Peace.

The Art of Kahlil Gibran has been generously sponsored by Philip Solomons Sr., the Southern Federation Foundation, the Cedar Club of Atlanta Foundation, and the Courtney Knight Gaines Foundation, Inc. 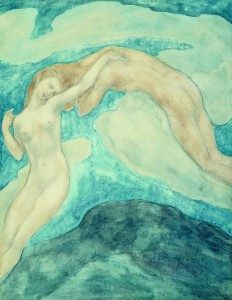 Telfair Museums is proud to announce the launch of its most recent publication, The Art of Kahlil Gibran by Dr. Suheil Bushrui and Tania June Sammons, published by Telfair Books.

In celebration of the launch, Tania June Sammons, Curator of the Owens-Thomas House and Decorative Arts at Telfair Museums, will present a lecture followed by a book-signing and reception.

Distributed by the University of Georgia Press, The Art of Kahlil Gibran features the Telfair’s collection of artwork by the popular twentieth-century literary figure and author of The Prophet. The collection, which is the largest holding of Gibran’s visual art in the United States, spans the artist’s career from his first exhibition at photographer Fred Holland Day’s studio in Boston in 1904 to works created during the last years of his life. The book also includes reproductions of photographs of Gibran and his New York studio, and a portrait of the young artist painted by Lilla Cabot Perry.

Open to museum members only. It pays to join!