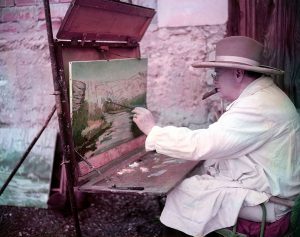 Telfair Museums, in partnership with the Georgia Historical Society and Millennium Gate Museum, present The Art of Diplomacy: Winston Churchill and the Pursuit of Painting. Duncan Sandys, a great-grandson of Winston Churchill, will give the opening lecture alongside Rodney Mims Cook, Jr. of the National Monuments Foundation.

The landmark exhibition, organized by Millennium Gate Museum, is the first of its kind in the United States since 1965 and features paintings by Sir Winston Churchill, as well as photographs, letters, and personal belongings on loan from members of his family. The paintings depict landscapes, family vacation spots, friends’ estates, gardens, seascapes, and still life interiors.

The Art of Diplomacy explores the relationship between Churchill’s strategic decision-making and his evolving practice as an artist. Beyond what he called a “joyride in a paint-box,” he saw painting as a testing ground for such leadership strengths as audacity, humility, foresight, and strength of memory.

The exhibition is on display during several anniversaries: 2015 marks the 50th anniversary of the death of Sir Winston Churchill and the 100th anniversary of when he first picked up a paintbrush, at the age of 40. The Art of Diplomacy opens in Savannah on the same day that Prince Charles will arrive in Turkey to commemorate the centennial of the Gallipoli campaign in World War I, which led to Churchill’s demotion from his post as First Lord of the Admiralty.

Savannah has a special connection to the Churchill family, and Telfair Museums will be the last stop for the exhibition, which has traveled to seven other Georgia locations. Gen. James Oglethorpe, the founder of the Colony of Georgia and the designer of Savannah, was taught military tactics and strategy by John Churchill, first Duke of Marlborough.

The Art of Diplomacy will include one of Churchill’s most important works, a landscape called The Tower of the Katoubia Mosque (1943). The landscape is the only piece that Churchill painted during World War II, and according to his Great-Grandson, Duncan Sandys, and the exhibition’s curator, J. English Cook, it might have played an important role in the war, as well.

“In January of 1943, Churchill secretly met with President Franklin Roosevelt in Casablanca, Morocco to decide the timing of D-Day, the invasion of France,” write Cook and Sandys in the exhibition catalogue. “After days of tough negotiation, Churchill convinced Roosevelt to support a D-Day campaign of overwhelming force in 1944. He invited Roosevelt to cement the agreement – which Churchill knew demanded a close personal friendship – over a trip to Marrakech to watch the sun set against the backdrop of the Atlas Mountains. The next day, Churchill painted the daytime view from the same spot, later giving the painting to Roosevelt.”

President Roosevelt hung the painting in his Hyde Park, New York home. His son, Elliot Roosevelt, sold it to a collector, and as the years went by, the painting passed through several hands and became known as the “lost Roosevelt.” In 2011 Brad Pitt and Angelina Jolie bought the painting. Never before has the couple loaned the painting for display, until doing so for this exhibition.

As the exhibition traveled through Georgia, local sponsorship was provided by Sea Island Bank, a division of Synovus Bank. The Savannah exhibition and related events are separately presented by Telfair Museums with funding by the City of Savannah’s Department of Cultural Affairs, Georgia Council for the Arts, and other museum supporters.

In honor of the fiftieth anniversary of the death of Sir Winston Churchill, Telfair Museums will host an exhibition of his personal paintings, many of which have never before been shown to the public. As a special highlight, we will be joined by two guests of honor—the noted architect Rodney Cook, and Duncan Sandys, a great-grandson of Winston Churchill—making this an evening you will not want to miss. RSVP at 912.790.8844 or rennerc@telfair.org.

Join Sir Winston Churchill’s great-grandson Duncan Sandys and noted architect, preservationist, and President of the National Monuments Foundation Rodney Mims Cook Jr. for a rare glimpse into the life of the great British prime minister and his family, art, and connections to Georgia. A reception will follow the lecture, which is sponsored in part by the Telfair Academy Guild.

Winston Churchill painted not only as a hobby to escape work but also as a kind of life philosophy. He famously stated, “When I get to heaven I mean to spend a considerable portion of the first million years in painting, and so to get to the bottom of the subject.” Come by the Jepson Center to tour the exhibit The Art of Diplomacy: Winston Churchill and the Pursuit of Painting and discuss why painting was integral to Churchill’s life. Then meet at the Mighty Eighth Air Force Museum for sketching. Contact Kip Bradley at 912.790.8823 or bradleyk@telfair.org.

Churchill painting a view of the Sorgue River while on vacation in the south of France, January 1, 1948
Courtesy Time & Life Pictures/Getty Images
Photographer: Frank Scherschel