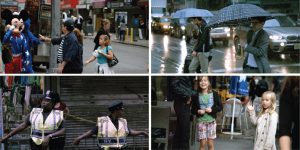 Nares, a native of London who came to New York in 1974, describes Street as “a love letter to my adopted home.” To make the video, Nares shot 16 hours of footage with a high-speed camera that is normally used from a stationary position to capture fleeting subjects, such as hummingbirds and speeding bullets, at a rate of between 500 and 1000 frames per second. Nares reversed the process by positioning the camera to film out of the back and sides of a moving SUV. He recorded his footage in six-second snippets, the maximum length of time that the camera can record at such a high resolution. He then greatly slowed his source material, and edited down the results to 61 minutes of steady, continuous motion—which, if shown in real time, would last only three minutes. Nares’ friend, guitarist and Sonic Youth co-founder Thurston Moore, composed and performed the video’s musical score on a 12-string acoustic guitar.

The street and street life have served as inspiration for painters and poets, filmmakers, and photographers since the birth of modernity. Nares’ inspiration for the film came from viewing actualité films by the turn-ofthe-century pioneers of cinema Auguste and Louis Lumière and Thomas Edison—who themselves used the moving image technology that they invented to magically capture the street life of their own time. In the early stages of the development of Street, the artist considered subtitling the piece “A film to be viewed 100 years from now.” This desire to record the present, as if from a great distance in the future, resonates with earlier chroniclers of the street, such as Walker Evans or Helen Levitt. Nares’ inventive use of the most modern technology available at the time of production resulted in a distinctive visual look that harkens back to the simulated three-dimensional effects of 19th-century stereographs, while also being utterly up-to-date in its evocation of increasingly isolated, virtual, and image-suffused existence in the 21st century.

James Nares was born in London in 1953. He lives and works in New York. His oeuvre encompasses painting, sculpture, drawing, film, and video. In his paintings, he seeks to capture the very moments in which he is creating them; individual paintings are most frequently made in single brush strokes that record a gestural passage of time and motion across the canvas. Nares’ films and videos reference many of the same preoccupations with movement, rhythm, and repetition, while also ranging further afield in their scope.