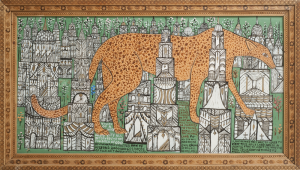 A self-proclaimed “Man of Visions,” Howard Finster was one of America’s most widely known and prolific self-taught artists, producing over 46,000 pieces of art before his death in 2001. Finster saw himself as a sacred artist, tirelessly recording his visionary prophesies and providing glimpses of a celestial outer space world that God revealed to him. These visionary journeys provided a limitless variety of images for his creative endeavors.

Born in rural Alabama in 1916, Finster went on to become a preacher, tent revivalist, and “master of 22 different trades” before building his roadside tribute to inventors, the Plant Farm Museum, in Summerville, Georgia. Later dubbed “Paradise Garden” by Esquire magazine, this rock- and junk-encrusted wonderland was the focus of Finster’s life work. In 1976, however, this focus shifted slightly. As he was using his hands to apply paint to a refurbished bicycle, Finster noticed that the paint smudge on his finger had created a perfect human face. A voice spoke to him saying “paint sacred art.” In response, Finster churned out thousands of sermon-laden artworks with subjects ranging from historical characters and popular culture icons like Elvis Presley to evangelistic fantasy landscapes and futuristic cities.

Finster’s preaching experience and showman-like personality helped shape his public persona and ever- increasing celebrity. To spread his vision beyond Paradise Garden, Finster designed record album covers for rock groups such as R.E.M. and Talking Heads. Interviews, films, and his famous appearance on The Tonight Show with Johnny Carson further advanced his evangelical message. Well-known and often misunderstood, his position remains polarized, suspended somewhere between awe for his tireless, faith-driven creativity and reluctance by the art community to accept his place in the pantheon of contemporary art. 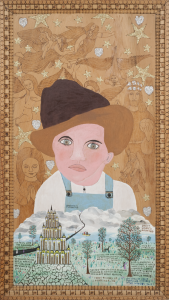 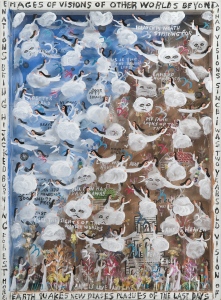 Folk art and rock and roll converge in this rarely screened classic documentary about Athens, Georgia, in the 1980s. In the film, Howard Finster is shown painting with his fingers and jamming on his banjo  with rock musician Dexter Romweber. Though Finster was based in Summerville, Georgia, his work was championed early on by Athens musicians R.E.M. who appear in the film along with legendary artists from the classic city including the B-52s, Pylon, Love Tractor, the Flat  Duo Jets and many others. (82 minutes)

Join Glen C. Davies, curator of the Stranger in Paradise exhibition for a look into the life and work of the Reverend Howard Finster. Mr. Davies is an artist, lecturer and curator, noted for his mural work in venues across the United States. Free admission, sponsored by the City of Savannah Department of Cultural Affairs.

Free admission, sponsored by the City of Savannah Department of Cultural Affairs.

Celebrate the inventive world of Howard Finster and folk art with this afternoon of activities for all ages. Telfair will present demonstrations by local self-taught artists and live old-time music by Joe Nelson. Kids can make different art projects using recycled items from the Chatham Country Recycling Center. Grownups will want to hear a fascinating talk by Jordan Poole, Executive Director for Howard Finster’s Paradise Gardens. Free admission, sponsored by the City of Savannah Department of Cultural Affairs

Bottom (r): Howard Finster; Emages of Visions of Other Worlds Beyond (3077), n.d.; Tractor enamel on Plexiglas; Courtesy of the Arient Family Collection