At the peak of his career, Auguste Rodin (French, 1840–1917) was regarded as the greatest sculptor since Michelangelo. Leaving behind 19th-century academic traditions, Rodin focused on conveying the vitality of the human spirit through bronze sculpture. His vigorous modeling emphasized his personal response to each subject, and he captured movement and emotion by altering traditional poses and gestures. In doing so, he created his own form of artistic expression. Today, Rodin’s pioneering sculpture is seen as a crucial link between traditional and modern art. Rodin: The Human Experience showcases the artist’s genius through a selection of 32 figures in bronze that span his long and remarkable career.

One of the ways in which Rodin remade sculpture was through his insistence that a part of a figure—such as a torso or a hand—could by itself convey meaning and thus be a complete work of art. By the beginning of the 20th century, Rodin’s partial figures and his marcottages (works that incorporate broken pieces into new works of sculpture) greatly influenced other sculptors like Maillol, Brancusi, and Matisse.

This year marks the centennial of Rodin’s death, and Telfair Museums joins with museums around the world to honor the anniversary with exhibitions and educational programs.

This exhibition is organized and made possible by the Iris & B. Gerald Cantor Foundation. The presentation of this exhibition at Telfair Museums is curated by Courtney McNeil, Chief Curator of Collections and Exhibitions.

Thank You to Our Sponsors: (3)

This sold-out event opened the striking exhibition of works by the renowned French sculptor with a lecture by Judith Sobol, Executive Director of the Iris and B. Gerald Cantor Foundation. Sobol spoke about the formation of the Cantor Collection, which at one time included 750 works, and about Rodin’s achievements in transforming sculpture from a traditional to a modern art form. The reception afterwards boasted living statues and French cuisine, leaving guests with a feeling of merriment and delight!

Celebrating Two Romantics: Rodin and Beethoven
Telfair Academy Guild presented two events in conjunction with the exhibition Rodin: The Human Experience. Music was a powerful influence on Auguste Rodin’s sculptural output and artistic vision. He felt close to Ludwig van Beethoven and found inspiration in the composer’s works and persona. These two programs explored connections between the music of Beethoven, whom the French sculptor called “the first Romantic,” and the artistic output of Rodin, the self-proclaimed “last Romantic.”

Rodin: Inspired by Beethoven
Monday, September 25, 10:30am
Lecture at Trinity United Methodist Church, followed by lunch at the Jepson Center

Former Iris & B. Gerald Cantor Foundation fellow and musicologist Olivia Mattis, PhD, explored the inspiration Rodin derived from the music of Beethoven. This lecture was followed by lunch at the Jepson Center.

Quynh Shannon: Passion for an Exhibition 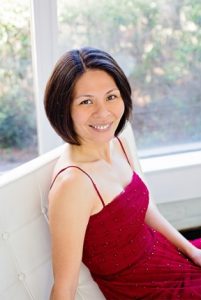 Quynh Shannon, an accomplished concert pianist and Instructor of Music at Savannah State University, made her Savannah solo piano debut. Quynh performed works by Rachmaninoff, Beethoven, and Mussorgsky; the performance was followed by an elegant dinner in the Jepson Center.