Psychedelic: Optical and Visionary Art Since the 1960s features works by 24 artists, including several pioneers and a special section devoted to artists who have lived in San Antonio.

When curator David S. Rubin first saw Frank Stella’s 1968 painting Double Scramble, he thought to himself, “That’s the most psychedelic Stella I’ve ever seen!” And then the curator began thinking of other artists who share a psychedelic sensibility. Thus the inspiration for the exhibition was born.

In addition to the Stella, the early years of the development are represented by dazzling abstractions by Richard Anuszkiewicz and Victor Vasarely, both of whom were included in the 1965 exhibition The Responsive Eye, which made “Op Art” a household term. Abstract paintings from the 1970s-80s by Deborah Remington and Philip Taaffe further push the limits of viewer perception, while a work by Jack Goldstein (a recent acquisition to the SAMA Collection) is one of the earliest examples of a painting based on computer-generated imagery. In addition to these optically charged abstractions, the exhibition includes significant figurative works by Alex Grey, a leader in transformative art, and Robert Williams, who once produced commercial illustrations for Ed “Big Daddy” Roth and Zap Comix.

By the 1990s, psychedelic aesthetic tendencies flourish in paintings by both abstract and figurative artists. During this period, Fred Tomaselli began paying nostalgic homage to his youth in the psychedelic era by making pattern paintings using pills and hemp leaves as materials. At the same time, Lari Pittman employed a similarly complex array of patterns as an aesthetic representation of his gay identity, while San Antonio’s Alex Rubio introduced a psychedelic vernacular to convey the energy of the street life of the Latino Barrio.

Another factor in the rising prevalence of psychedelic contemporary art has been the rapid development of computer technology. A pioneer in this regard is San Antonio’s George Cisneros, who developed a light sculpture in a box in 1978, converted it from an analog to digital format in 1986, and will exhibit the work for the first time simultaneously in the box and projected on a wall. The exhibition also includes digital animations by the late Jeremy Blake, Ray Rapp, and Sterling Ruby. San Antonio-born Richie Budd will exhibit a sculptural installation that provides viewers with a unique “multisensory” experience.

By the turn of the millennium, the psychedelic sensibility among contemporary artists had become a widespread phenomenon, and today it continues to thrive. In the year 2000, the veteran artist Al Held created his most ambitious paintings that reveal his interests in interconnectivity and string theory. And, as a microcosm of what can be considered to be one of the first major trends of the 21st century, the exhibition brings together recent works by several artists who have lived in or near San Antonio, among them Albert Alvarez, James Cobb, Mark Hogensen, Constance Lowe, Erik Parker, Susie Rosmarin, and Michael Velliquette.

It should be stressed that this exhibition is about the influence of psychedelic culture on the art world-not necessarily the influence of drugs. Little of the content addresses drug issues; rather, in confronting a variety of issues, the artists employ a psychedelic aesthetic sensibility-extremes of color and light that did not exist to any extent in culture or in contemporary art prior to the birth of the psychedelic era.

Overall, the exhibition and accompanying book tell the story of an aesthetic history that begins in the 1960s and, until now, has not been explored or analyzed. In presenting a range of work bonded around a unified theme and by using a narrative approach to presenting the material, the project will achieve the Museum’s ongoing mission of educating and enlightening diverse viewers of all ages and backgrounds about contemporary art, in an appealing and user-friendly manner.

The exhibition is curated by David S. Rubin, The Brown Foundation Curator of Contemporary Art at the San Antonio Museum of Art.

This exhibition is organized by the San Antonio Museum of Art with generous support from SAMA Contemporaries, Jerry Gore, and the Toby Devan Lewis Philanthropic Fund of The Jewish Community Federation of Cleveland.

Groovy Party
March 3, 7pm
Celebrate the opening of Psychedelic: Optical and Visionary Art Since the 1960s by enjoying a psychedelic light show, music from the 60s, go-go dancers, vintage VW’s and special performances by Savannah Arts Academy Dance Company. Guests will be treated to some good lovin’ from Lovin Spoons!
FREE to museum members/$10 for non- members
For more information call 912.790.8890. 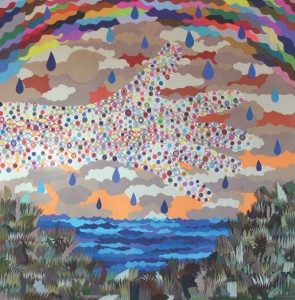 Thank you to our sponsors: