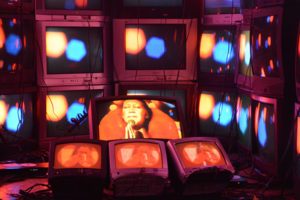 Paul Stephen Benjamin (American, b. 1966) is a conceptual artist whose work is a meditation on the color black, specifically as an entry point into discussions of identity, race, and masculinity. Benjamin’s artistic suggestion is that a cohesive message about identity is all but impossible but still worthy of exploration. Benjamin creates multilayered and large-scale sculptures and video installations, incorporating history, text, and popular culture. This solo presentation at Telfair Museums will be the artist’s largest focused presentation of his video installations to date.

Benjamin also investigates the concept of the “sound of black” by editing videos to repeat phrases, video clips, or letters to create layered, haunting compositions heard in rhythmic rounds. The video monitors are usually in various states of technological decay, and shown stacked and with all external and necessary devices like electrical cords and DVD players. Benjamin’s video installations include references to blackness — from the color of the discarded monitors that he stacks to make his sculptural towers to the faces of notable African Americans as varied as Shirley Chisholm, Condoleezza Rice, Eldridge Cleaver, Beyoncé, LeBron James, Billie Holliday, Nina Simone, Aretha Franklin, and Lil Wayne.

This simple entry point of the “color black” or the “sound of black” is used to explore the complexities, politics, poetics, and subjectivities of racial identity – whether stereotyped, projected, or self-identified. Benjamin is certainly a political artist, but he’s most interested in stepping back and allowing his work to operate as a medium for interpretation and introspection.

In collaboration with the Savannah Black Heritage Festival, the museum presents a conversation with Atlanta-based artist Paul Stephen Benjamin moderated by Rachel Reese, Telfair Museums Associate Curator of Modern and Contemporary Art.
Paul Stephen Benjamin holds a BA from the University of Illinois at Urbana-Champaign and an MFA from Georgia State University. Benjamin is a recent recipient of The Museum of Contemporary Art of Georgia Working Artist Project. He will exhibit new works in 2017 at the MOCA GA as a part of the award. In 2016, Benjamin exhibited Black is the Color at the High Museum of Art in Atlanta. His work has been exhibited at the Mayor Office of Cultural Affairs in Atlanta, as well as in group exhibitions at Atlanta Contemporary. Among his awards are the MOCA GA WAP, Artadia Award 2014, Winnie B. Chandler Fellowship, Diasporal Rhythms Artists Recognition Award, Hambidge Fellowship, The Atlanta Contemporary Art Center Studio Program, and the Forward Arts Emerging Artists Award.

This exhibition is organized by Telfair Museums, and curated by Rachel Reese, Associate Curator of Modern and Contemporary Art.

Investment is provided by the City of Savannah.