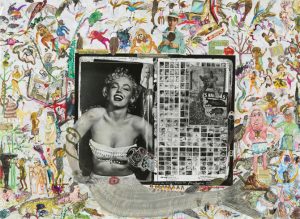 Marilyn Monroe was an American star, but she captivated the world. Telfair Museums is pleased to present Marilyn: Celebrating an American Icon, an internationally traveling exhibition featuring dozens of works owned by private collectors in Europe, Sotheby’s archives, European art galleries and the estates of artists who interpreted the muse that was “Marilyn.”

Presented in a variety of media including videos, photos and paintings, Marilyn captures the celebrity of Monroe behind the scenes and in the spotlight of high society. The exhibit includes more than 50 artists’ works, in styles ranging from Alfred Eisenstaedt’s photography to Andy Warhol’s Pop art.

Offering a visual tour of Marilyn Monroe’s rise to stardom, the images illustrate not only the recognizable celebrity, but also Marilyn’s struggle to empower herself. The exhibition includes a series of silver gelatin prints by world-renowned British photographer Cecil Beaton, including a photograph reported to be Marilyn’s favorite picture of herself–lying across a bed in a white dress, holding a carnation. 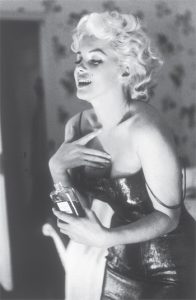 During her brief career from 1947 to 1962, Marilyn made a lasting impression on Hollywood, appearing in 30 films. However, a great loneliness can be felt in many of Marilyn’s photographs. As images such as those by friend and photographer George Barris demonstrate, Marilyn’s light and radiance was often a facade constructed for the public eye, disguising her frequently dark moods. Barris’ photographs from 1962, showing Marilyn laughing and striking poses, are some of the last taken of the actress, who was found dead in her Brentwood, California home on August 5, 1962.

Following the introspective lens of photographers like Barris, the final section of the exhibition is a presentation of paintings and other works of art created by American, Asian and European artists after Marilyn Monroe’s death. Modern and avant-garde artists such as Mel Ramos and Antonio de Felipe offer their interpretations of the actress. Works in this section often reflect the artists’ ideas on sexuality, commercialism and exploitation in the world. Most of all, these works reveal the character of Marilyn Monroe as an enduring cultural phenomenon.

Though her life ended prematurely more than fifty years ago, the world’s fascination with Marilyn Monroe’s magnetic appeal and much-publicized private life has continued to thrive over time. Marilyn: Celebrating an American Icon pays tribute to America’s favorite sex symbol as interpreted through the work of generations of artists from around the world. Rarely does the American public enjoy the opportunity to view these images.

This exhibition is organized by sairally Fine Arts and Consulting in Hamburg, Germany and toured by International Arts and Artists, Washington, D.C.

Lecture by Telfair Museums’ Director and CEO, Lisa Grove Followed by reception for general membership and guests with paid admission. Includes light appetizers and cash bar for beer and wine.

Marilyn Film Classics
Telfair presents two of Marilyn Monroe’s most important films, highlighting her abilities in both comedy and drama, with introductions by local film professors. Free to Telfair members, $5 admission for non-members.

Billy Wilder’s classic comedy features Marilyn Monroe, who won a golden Globe for Best Actress, as a ukuleleplaying member of a female band. Jack Lemmon and Tony Curtis play a pair of musicians on the run from a mob boss after witnessing the St. Valentine’s Day Massacre. Cross-dressing antics by Lemmon and Curtis are highlights of one of American films’ best comedies. (120 minutes).

Marilyn Monroe and Clark Gable each gave moving and nuanced final performances in this western drama written by Arthur Miller and directed by John Huston. In the film, Marilyn plays a recent divorcee who falls in with an aging cowboy (Gable), two younger men (Montgomery Clift, Eli Wallach) and a scheme to capture wild mustangs in Nevada. Images taken by Magnum photographers during the filming of The Misfits are included in the Marilyn exhibition. (124 minutes).