“My painting starts with a complication on the canvas surface, done with as much spontaneity and as little memory as possible. This then exists as the subject…At some undetermined point the subject becomes the object, existing independently as a painting.”  – James Brooks 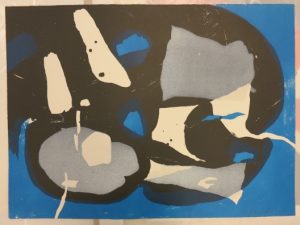 Formally considered an Abstract Expressionist, James Brooks produced bright, dense works marked by their vibrating tension between spontaneous form and controlled gesture. Born in 1906 in St. Louis, Missouri, and raised in Dallas, Texas, Brooks studied art at Southern Methodist University and the Dallas Art Institute before moving to New York City in 1926 to attend classes at the Art Students League. During the Great Depression, Brooks built his reputation as a talented and ambitious painter, working for the Works Progress Administration on several important commissions including Flight, a 237-foot narrative mural painted at LaGuardia Airport that historicizes man’s innate desire to fly. 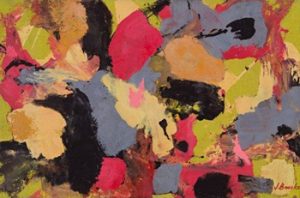 After a stint as a combat artist during World War II, Brooks abandoned American Scene Realism in favor of deconstructed and flattened figures inspired by the cubist work of Picasso and Braque. His work further delved into abstraction after reconnecting with his friend Jackson Pollock in 1946 (they originally met in NYC in the 30s). Brooks joined Pollock as a member of the New York School, a group of avant-garde artists defiantly dubbed “The Irascibles.” These artists freed themselves from the constraints of producing representational paintings and instead focused on the inherent flatness of the canvas and the act of painting itself. Art critic Harold Rosenberg famously wrote in his seminal essay “The American Action Painters,” in Art News (1952) that “What was to go on the canvas was not a picture but an event….The big moment came when it was decided to paint… just to PAINT. The gesture on the canvas was a gesture of liberation, from Value ─ political, esthetic, moral.” Brooks’s expressive explorations led him to create his own method of pouring pigment directly onto an unprimed canvas. He characterized the stain technique of the late 1940s as “accidental” and “irresponsible,” terms that place his paintings in dialogue with the Surrealists, who encouraged chance and subconscious as essential to the creative process.

Brooks’s first solo exhibition was held at the Peridot Gallery in New York and his work has continued to be shown at galleries and museums across the country, with a notable traveling retrospective organized by the Whitney Museum of Art in 1963. His artwork is currently represented in many public collections, including the Smithsonian, the Brooklyn Museum, the Guggenheim, and the Metropolitan Museum of Art, as well as Telfair Museums. James Brooks died of complications from Alzheimer’s in 1992 at the age of 86, leaving behind an undeniable legacy. This installation of paintings and works on paper by Brooks celebrates the recent gift of eight prints from the James and Charlotte Brooks Foundation in honor of Dwight Emanuelson, a longtime supporter of Telfair Museums.