George Bellows’ Snow-Capped River of 1911, which depicts a view of the Hudson River and the Palisades from Manhattan’s Riverside Park, is one of the Telfair’s most important and beloved paintings. The work was acquired for the Telfair directly from Bellows by artist Gari Melchers, who served as the museum’s fine arts advisor from 1906-1916.

In celebration of Telfair Museums’ 125th Anniversary, and the 100th anniversary of the creation and acquisition of Snow-Capped River, this very special Bellow piece will be reunited with a small group of Riverside Park compositions by Bellows. This direct comparison will result in an enhanced understanding and appreciation of this pivotal work within the museum’s collection. The comparative works will be on loan from noteworthy public New York collections including the Metropolitan Museum of Art, Whitney Museum of American Art, and Brooklyn Museum. 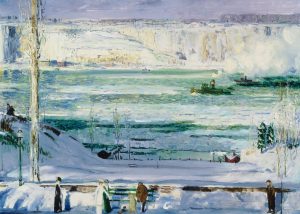