We are excited to offer local residents FREE ADMISSION to the Jepson Center and Telfair Academy on Saturdays and Sundays through August 28!

Taken during the year Elvis Presley turned 21, Alfred Wertheimer’s photographs are a remarkable visual record of rock ‘n’ roll’s most enduring figure. When Elvis walked on stage in 1956, time stopped—and then exploded. The earth shook on its axis and the beat of everyday life was jolted. In an instant, mainstream America’s veneer of cultural complacency evaporated. The year 1956 was the year Elvis released his first record, made his first television appearance, and started his movie career; it was the year he became a star.

Alfred Wertheimer (1929–2014), then a young freelance photojournalist, was there to document the moment that Elvis erupted onto the cultural landscape. No photographer ever again had the closeness to Elvis that Wertheimer enjoyed. These images provide the first and last unguarded look at Elvis, featuring images of him in every aspect of his life—from performance and with his fans, to the recording studio and at home with his family.

Elvis at 21: Photographs by Alfred Wertheimer includes approximately 40 photographs printed from the original 1956 negatives under the supervision of the photographer. The presentation of this exhibition at Telfair Museums coincides with the 60th anniversary of Elvis’s first concert in Savannah, which was held on June 25, 1956. It also marks the first exhibition of this body of work since the death of the photographer in October 2014.

Elvis at 21 is organized by Govinda Gallery, Washington, DC, and is dedicated to the memory of Kirk Varnedoe, a devoted Elvis fan. Generous support for this exhibition is provided by Agnes Gund, The Gretsch Family Foundation in honor of Elizabeth and Adam Murphy, Mr. and Mrs. John E. Cay III, Mrs. Robert O. Levitt, and Mrs. Helen R. Steward. © The Estate of Alfred Wertheimer/Courtesy Govinda Gallery 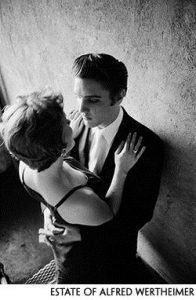 Put on your poodle skirt or poof up your pompadour to celebrate the opening of Elvis at 21! The evening gets swinging with a talk by exhibition organizer and music photography expert Chris Murray. Then stick around for our scorchin’ sock hop, featuring the best 50s tunes and dancing led by our pals at Savannah Ballroom. And don’t forget to check out the exhibition for your backstage pass to the early life of a legend!

Chris Murray is founder and director of Govinda Gallery, the leading gallery in the world for photographs related to contemporary music. He has organized more than 200 major exhibitions of paintings, drawings, and photographs and has received critical accolades in Rolling Stone, The Washington Post, American Photo, and Vanity Fair. Murray wrote the introduction to the book Elvis 1956. He has lectured at venues around the country, including the Rock and Roll Hall of Fame.