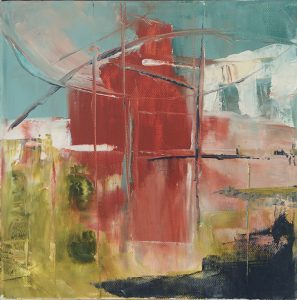 The Jepson Center for the Arts, designed by world-renowned architect Moshe Safdie, opened on March 10, 2006, after years of dedicated planning. Safdie envisioned a building that would both reflect “a new spirit which speaks of the openness that contemporary society aspires to,” as well as maintain the historical integrity of the urban architecture of Savannah. Now, after nearly a decade, the Jepson Center continues to fulfill its role as a cultural icon within our city, playing host to educational programs, traveling exhibitions, and an expanding collection of modern and contemporary art. 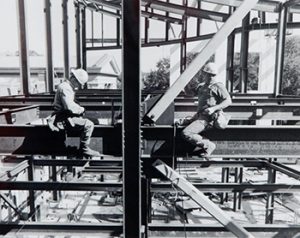 As the Jepson Center was being built, two local artists paid tribute to the process of its construction as a cultural event and also looked forward to its future as a venue for contemporary art. Savannah-born artist Jack Leigh (1948-2004), known for his empathetic black and white portraits of Southern life, photographed the construction in 2003. His depictions capture the interplay of light through the solid structural forms and also humanize the construction by featuring the workers as they climb, sit upon, and traverse the steel beams. Daniel E. Smith was similarly inspired to capture the rising edifice, painting its construction en plein air. Smith became a professional artist in 1999, after leaving a monastery to pursue his M.F.A. in painting from SCAD. Guided by a belief in the power of color and form, Smith used a bright palette to draw attention to the colors of the building, stating that he wanted to showcase the multihued layers of the Jepson Center before they were enclosed in white limestone.

2016 marks the 10th anniversary of the Jepson Center and gives the community and visitors a chance to consider the major impact of the museum on the city over the last decade. Both Jack Leigh and Daniel E. Smith portrayed the institution with an eye to its future, and their works highlight how the Jepson Center accomplished the feat of being a creative force in the heart of Savannah and continues to look onwards and upwards.