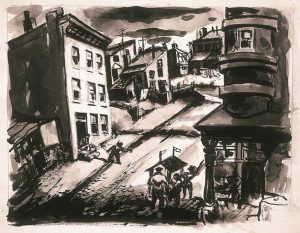 This small exhibition drawn from Telfair Museums’ permanent collection focuses on African American artists who were participants in the Great Migration or who told the story of this important part of American history. Between 1910 and the beginning of World War II, more than one and one half million African Americans left the south in search of greater opportunity and freedom from the discrimination and Jim Crow laws of the segregated south. This Great Migration directly affected African American artists in many ways, from southerners who relocated during this period, to artists who were already living in the North observing history in the making.

Romare Bearden left North Carolina with his parents as a child but carried memories and images of the south into works made throughout his long and significant career. In 1921, sculptor Augusta Savage moved from Florida to New York City, where she attended the Cooper Union and later became an influential teacher. Originally from Griffin, Georgia, Dox Thrash studied in Chicago and later settled in Philadelphia where he became known as a master printmaker. New Jersey-born Jacob Lawrence became perhaps the best known chronicler of the Great Migration with his Migration of the Negro series of paintings created in 1941. Some historians indicate a second phase of migration extending from the 1940s to as late as 1970. In the decades since the struggles of the Civil Rights movement, another trend has emerged, with many African Americans drawn back to the south due to better economic opportunities in cities such as Atlanta. Artist Luther Vann, who left Savannah with his parents for New York in the 1940s, returned to his home city in the 1980s bringing his northern training and influences to bear in views of the local scene. Together these examples represent a small sampling of work by artists whose lives intertwined with this landmark event in U.S. history.

Free Admission, thanks to project funding by the City of Savannah Department of Cultural Affairs and the Jacob and Gwendolyn Lawrence Foundation.