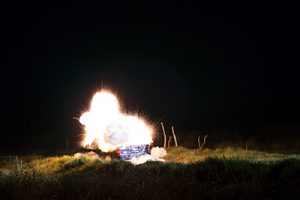 On view daily in the Neises Auditorium, unless otherwise noted.

PARAALLEGORIES is a video series by artist Adela Goldbard inspired by her critical observations of Mexico’s press over the past five years, with particular focus on its coverage of the Mexican Drug War and the complicated nature of political corruption. Goldbard considers how the press is mediated, and what ideologies it promotes—especially during events in which violence, protest, dissidence, or repression make the news. She examines these flashpoints in Mexico’s recent history through reenactment, combining manual, handicraft work with high quality technical cinematography. The result is a conflation of fact and fiction that questions how reality is addressed, presented, and misconstrued.

Goldbard borrows images from news events to construct full-scale models with reed, newspaper, and cardboard that are then destroyed with pyrotechnics in an intersection of allegory, black humor, and metaphor. The objects are built and razed in collaboration with pyrotechnicians and craftsmen from Tultepec, Mexico (just north of Mexico City) using materials and procedures from their handmade fireworks traditions. Goldbard’s video series specifically references the Burning of Judas, a tradition of Catholic origin in which effigies of public figures, built after Judas Iscariot, are detonated in a ritual to allegorically get rid of the evil embodied by the traitor.

Adela Goldbard (Mexican, b. 1979) lives and works in Chicago and Mexico City. Goldbard is an artist and filmmaker who believes in the political power of art to generate social transformation. Her work investigates unusual connections among visual anthropology, collaborative filmmaking and sculpture through artisanal construction, re-enactment, allegory, and dark humor. Her work includes sculpture, photography, video, text, and public actions, and incorporates a critical perspective on manual labor, land exploitation and archeological preservation. Goldbard has been a member of the National System of Artistic Creators of Mexico since 2015. She holds a bachelor’s degree in Hispanic Language and Literature from the National University of Mexico and is currently completing her MFA at the School of the Art Institute of Chicago, where she was granted the New Artist Society Scholarship. 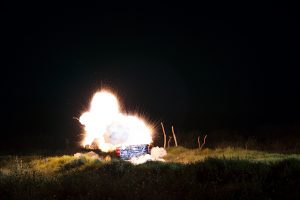 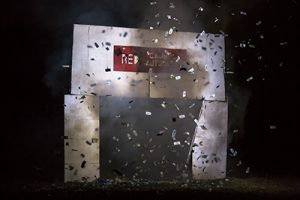 The ATM in this video was built to scale to replicate actual ATM explosions that the media tags interchangeably as anarchist, terrorist, or as organized crime. 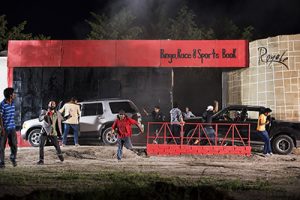 Casino Royale responds to the narco-terrorist attack that killed 52 people at the Casino Royale in Monterrey in August 2011. 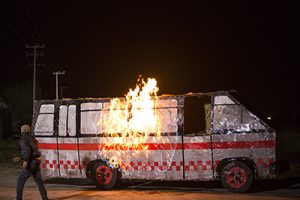 Microbus recreates the frequent bus blockage strategy utilized by both narcos and independent groups organized in resistance to the spread of cartel-based crime.