By Shannon Browning-Mullis, curator of history and decorative arts

Christmas as we know it today is a relatively new phenomenon. The earliest roots of many of the festivals and holidays we celebrate today lie in the agrarian cultures of our distant ancestors. 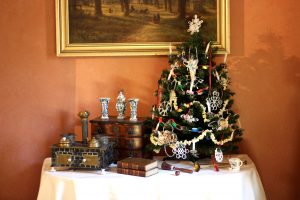 The deepest roots of today’s Christmas are here, in the winter solstice of pre-Christian Western Europe, but many parts of our modern Christmas also come from ancient Rome, specifically from the Roman holiday Saturnalia. The Persian god Mithras and the Egyptian god Horus, who were both sun gods said to be born on December 25, also contribute to the story. The Christian church originally opposed all such pagan deities and holidays, but they were unsuccessful at stopping their practice. Instead, they gradually gave already existing holidays new meanings. So, Christmas is celebrated on December 25 not because it is the date of Jesus’ birth, but rather, because that is around the time that festivities for Winter Solstice, Saturnalia, Mithras, and Horus were already occurring. The first mention of a Christian celebration of Christmas occurred in the year 336, but it would still be centuries before the holiday became common practice.

By the time the British established colonies in the Americas, Christmas was firmly positioned as a major holiday in England, though not quite as we think of it today. The English Christmas still had the flavor of the old-world agrarian festival of excess and indulgence. It was known as a time to eat, drink, and celebrate. It was also known as a time to relax inhibitions and societal constrictions and indulge appetites of a variety of types. These tendencies and their pagan roots made Christmas very unpopular with Puritans. Oliver Cromwell banned Christmas during his rule of the short lived British Republic. It is no surprise that Christmas was originally banned in the puritan colonies, as well. A public notice read: “Public notice: the observation of Christmas having been deemed a sacrilege, the exchanging of gifts and greetings, dressing in fine clothing, feasting and similar satanical practices are hereby forbidden with the offender liable to a fine of five shillings.” Fortunately for those of us who enjoy Christmas today, the Puritans were not the only people to settle the Americas, and with other groups came other customs.

The first Christmas-like celebrations in the colonies were often in fact New Year’s celebrations and could occur anytime from December 6th to January 6th. By the time the holiday originally found its way to American shores, it was a largely male and largely rowdy affair.  By the late 18th century, the upper classes had had enough of these revelries and people began to celebrate Christmas with those of their own class. Women of elite families opened their homes to visitors on Christmas and served refreshments to the gentlemen of their acquaintance, while their husbands visited other households. Women were known to brag about the number of visitors they had when they opened their homes at Christmas. One of New York’s fashionable ladies boasted of a Christmas in the mid-1830s when she entertained about 70 gentlemen in five hours while her husband visited 68 households.

The domestication of Christmas was not universal. This is true for Savannah and our neighbors in the region. A newspaper report from Charleston in 1843 lists the incidents of the previous Christmas, it says, “We observe by the Charleston Courier, that the Mayor of that city has given notice that the ordinance in relation to the firing of crackers, pistols, guns, & c. in the streets on Christmas day will hereafter be enforced as on other days. Several accidents occurred last Christmas by the careless use of firearms. They are thus enumerated in the Courier: Among others we have heard of two white youths having been much cut and disfigured, one by the bursting of an over-loaded pistol, the other by the bursting of a bottle containing gunpowder, into which a coal fire was dropped. Another youth had his left hand dreadfully burnt and lacerated in King street; and in Beaufain street, early in the morning; a pistol burst in the hands of a white lad, tearing off one of his fore fingers. A negro boy, about 12 years of age, was dreadfully injured by the bursting of a small cannon, made of a part of a pistol barrel, parts of which penetrated his skull, and a piece of the barrel burying itself in his arm. It is believed that he will recover from the injuries. A lady living in Savage street, while lying in bed, about six o’clock in the morning, heard the window glass crash, and a ball whiz over her head, and on rising up and examining, found a conical pellet, such as are used for Clark’s patent rifle, imbedded in the wall near her bed-side.”

Clearly, celebrating Christmas on the streets of Southern cities took a bit of courage. A letter to the editor in an 1834 edition of the Savannah Republican reads, “Mr. Editor – It appears that the practice of firing India crackers about streets during the holidays is about to be resumed by the boys of this place. It is very desirable that the officers of the police will cause this practice to be discontinued by the enforcement of such laws as have been adopted for that purpose; otherwise, we may possibly have another Merry Christmas similar to that of the last; or some individual may have the unpleasant feeling of having their horses running through the streets, and injured to a greater or lesser degree by the result.”

So, how do we celebrate Christmas at the Telfair Academy and Owens-Thomas House & Slave Quarters? During the Christmas season, the period rooms of the Telfair Academy are interpreted to represent the 1820s-1860s era of Mary Telfair, her brother Alexander, sisters Sarah and Margaret, and their enslaved house servants George, Juddy, Coomba, and Lavinia. The oak room depicts the holiday season as per a December 24, 1838 letter from Mary to her friend Mary Few. “This is Christmas, dear Mary, when all the world here are preparing for their family feasts. We three are seated in our quiet parlour drawn close around a large wood fire for the weather is intensely cold and no sound invades my ear but the report of pop guns.”

The Telfairs were Presbyterians and attended church on Christmas Day. The dining room is set to show their enjoyment of the holiday dinner as noted in Mary Telfair’s journal of 1958. “We had a small dinner party consisting of five guests – more than the Graces and less than the Museum. Conversation was general and occasionally playful.”

In the basement kitchen, one example of a Christmas tradition involving enslaved in an urban setting comes also from Mary Telfair’s correspondence with Mary Few. “It is a custom with us to cook a large dinner for our servants. Each has the privilege of inviting their friends – so they keep the festival and are made happy by it.” The reversal of typical roles at Christmas as Mary and her family serve their enslaved household was a tradition. We can see how closely urban domestic slaves lived with their owners. They did not have the freedom to celebrate as they chose. Instead, they were forced to spend the holiday in the company of their oppressors, even if they were being served. I would love to know what these meals were like. I can’t imagine that the Telfair women were well versed in food preparation. It is possible that Juddy, the enslaved cook, had to prepare the meal that the Telfair sisters then served to them. The enslaved people at the meal were likely George Gibbons, Coomba, Juddy, and Lavinia.

The Owens-Thomas House & Slave Quarters offers an interpretation of holiday scenes throughout the occupation of the different families. For the 1820 Richardson family, there is a party in the drawing room. Twelfth Night Characters was a popular parlor game played on January 6th, which also marked the end of the holiday season. The Twelfth Night Cake sits on the pier table with plates and dessert forks waiting to be served. You can also see the punch bowl from which guests have been enjoying their Christmas wassail or mulled punch. There is a bit of greenery on the mantles. Bringing evergreens into the home has been a tradition for a very long time, possibly thousands of years. Because evergreens survive winter, they are considered symbols of good health and good fortune.

The entry hall includes a kissing ball and Christmas cards. According to Washington Irving, when a couple kissed under the mistletoe, they had to pluck a berry. When all the berries were gone, the kissing was over. The sending of Christmas greeting cards began in the Victorian era. An edition of 1,000 Christmas cards were printed and placed on sale in London in 1843.

The formal dining room is furnished for an 1850s Christmas dinner for Sarah and George Owens. Some of their children may have been present as well. John Wallace Owens returned to Savannah in 1848 to practice law. The 29-year-old bachelor would likely have been in attendance. George Savage Owens was 25 in 1850 and lived two blocks from his parents with his bride of one year, Elizabeth Gordon Wayne. The Owens’ three daughters lived here their entire lives and would have been at such an event.  Mary was 31, Sally was 22, and Maggie was 21. There were likely friends and acquaintances also invited to the lavish meal.

Maggie Owens married Dr. James Gray Thomas in 1865. The family dining room is set up for Christmas in 1875, when their daughters were children. Meta was 4 and Maude was 6. There is a small, tabletop Christmas tree decorated with quilled ornaments and toys for the children. Gift giving began with the emergence of a comfortable American middle class and the availability of mass produced consumer products, which had been growing since the beginning of the industrial revolution. The Thomas girls have been quilling at the table with their mother. They roll thin strips of paper around a stylus, and paste them into snowflake-like designs. You can see the mess they’ve made!

Come visit us during the holidays and compare your own traditions to those of the past.