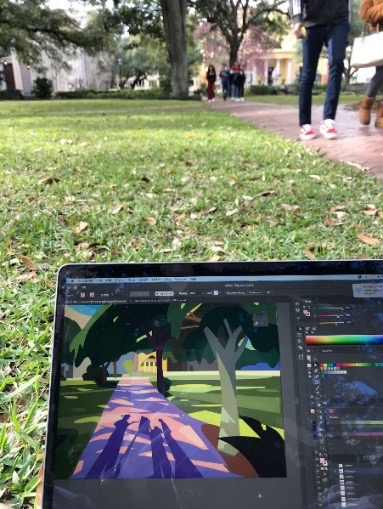 In contrast to the blatant easel and canvas of a plein air painter, when you are making art on a computer in a public place, people don’t come up and ask you what you’re doing. I began planning the design for a mural on the third-floor landing wall of the Jepson Center, titled Late Afternoon near the Academy, in early February of this year. To begin, I sat in Telfair Square with my laptop open and translated the thousands of colors I saw outside utilizing my own method of rendering color, the benefit of the color slider on Illustrator moving things along. The irony of making art outside using modern-day technology was palpable as I thought of the physical strength that early to mid 19th-century painters such as Cezanne, Constable, or Van Gogh must have had, to strap all their supplies to their backs like vagabonds; easel, turpentine, and all the other things they’d need (not to mention their increased physical discomfort-no bug spray, no sunblock) to work in the landscape. It made me consider accessibility and the relative ease we now have to see and make art. 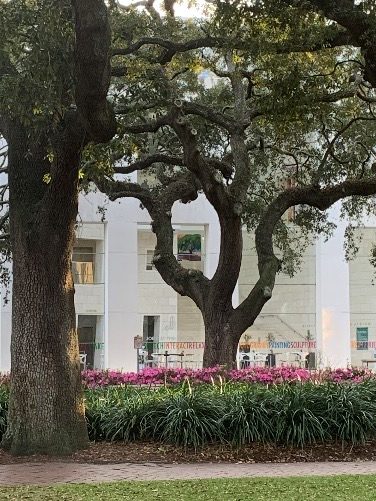 After translating the design from my laptop to the wall, I worked on the mural for about two and half weeks until it was finished. The museum is currently closed, but you can still see slivers of the mural from outside the building. Associate Curator of Modern and Contemporary Art Erin Dunn pointed out that at certain angles in the square it was inspired by, viewers can see the painting through the layers of live oaks and the glass façade of the Jepson Center like “a painting of trees seen through the trees.”

One thing that surprised me was that painting the mural was actually like any other painting I worked on. I had planned so much, hoping to mitigate any unforeseeable obstacles. I made intricate maps of the piece and carefully mixed all the paint in my studio before I arrived at the museum. 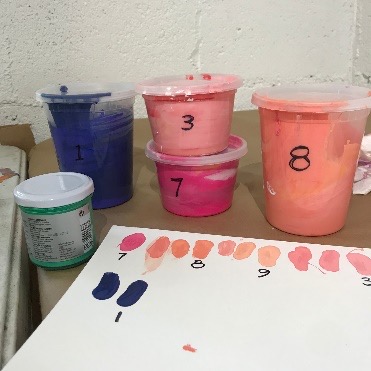 After sketching out the design at the Jepson Center on a quiet Friday night, I looked up at the wall, still just an outline, and thought, this is nothing! I’m ready and have a strong strategy to get this completed. Looking back, I believe that my painting heroes were looking down on me like mischievous Greek gods at that point, Diebenkorn and Hockney, who isn’t even dead, as if to say that maybe it won’t be so easy as I originally thought. After the initial filling-up of shapes, parts of the composition were still disjointed. I had to do the work the way we always do. I sat with my folding chair in front of it, squinting and editing, squinting and revising; which is no small feat on a piece that is approximately 10 feet x 17 feet. Making a painting still takes time no matter what fancy tools you use at the outset. You still need time. Time seems to be what we all have plenty of in this moment. The good news is that’s just what you need to make and see art.

Late Afternoon near the Academy is affiliated with Telfair Museums’ #art912 program, an initiative dedicated to raising the visibility and promoting the vitality of artists living and working in Savannah through exhibition opportunities, public programs, and outreach.

A native of Sewanee, Tennessee, Richardson holds a B.F.A. and a M.A.T. from the Savannah College of Art and Design. She spent a year at the Marchutz School of Painting and Drawing in Aix-en-Provence, France. The school focuses on perception and the theories of Cezanne, whose studio was a few meters from the school. The Vermont Studio Center awarded her a scholarship for a monthlong residency. She has also studied the landscape at the Art Students League in NYC, the Pennsylvania Academy of Fine Arts, and the New York Studio School of Painting and Drawing. She lives and works in Savannah.

#art912 is an initiative dedicated to raising the visibility and promoting the vitality of artists living and working in Savannah through exhibition opportunities, public programs, and outreach.