The discovery of the Bird Girl involved all the elements of a blockbuster film: pendulous Spanish moss, a foggy cemetery, and a journalist on assignment. Photographer Jack Leigh’s fortuitous shot of the bronze sculpture in Bonaventure Cemetery even occurred in a mystifying light, as the day turned to dusk—or so the story goes. These enticing tales have fueled the Bird Girl’s cult following; however, they have tended to eclipse the artist behind this iconic Savannah symbol that helped make Midnight in the Garden of Good and Evil famous.

While much is known about the Bird Girl itself, what is known of its creator? Her name was Sylvia Shaw Judson, and she was a professional sculptor and author from the Chicago area. She worked as a sculptor at a time when women were still struggling to integrate into the broader art world. Paving the way for Judson’s contributions was the artist Anna Hyatt Huntington, whose work resides in Telfair Museums’ permanent collection.

Huntington specialized in large equestrian statues and animal sculptures, allowing her to become, in the early 20th century, one of the highest-paid professional women in the United States. Her choice of subject matter appears to have been anything but financially motivated; she had a lifelong fondness for animal subjects, a passion likely inspired by her father, an eminent zoologist and paleontologist at the Boston Society of Natural History. She warmly praised her profession as an animalier, or artist who specializes in the realistic depiction of animals: “I have always thought the animalier had more fun in his work than artists in other branches, as he must be a real lover of animals to be able to interpret them—which means your work brings you in constant contact with material that delights you, making every moment a fascinating study.” Her Two Swans (1934) from Telfair’s collection reflects this artistic passion. The two birds go head to head, their arched necks and ruffled feathers suggesting movement and perhaps even friction. Nevertheless, the work draws the viewer’s eye to the creatures’ necks, which meet in the middle to create an unmistakable heart shape.

Huntington was a mentor who encouraged the younger Judson to pursue her artistic vocation. In 1931, Huntington and her husband founded the first public sculpture garden in America, the Brookgreen Gardens, A Society for Southeastern Flora and Fauna, in South Carolina. In 1936, the Brookgreen acquired a piece by Judson, an addition which fulfilled the garden’s mission of “collecting, exhibiting, and preserving American figurative sculpture.”

Like Huntington, Judson devoted her practice to the creation of lifelike sculptures. However, Judson’s focus on realist garden sculpture was significantly less fashionable at a time when modern sculpture tended toward abstraction. Before the Bird Girl came to international attention in the 1990s, Judson was better known for her 1959 monument of Mary Dyer, a Quaker who was martyred in 1660 for her religious beliefs. The artist had also received attention from Jacqueline Kennedy’s purchase of The Little Gardener (1935) for the White House Rose Garden. While she was trained at the Art Institute of Chicago by Albin Polasek and at the Academy Grande Chaumière in Paris by Antoine Bourdelle, Judson and her work appear to have been most influenced by her father and her Quaker faith. She dedicated her first book, For Gardens and Other Places: The Sculptures of Sylvia Shaw Judson (1967), to her father, the architect Howard Van Doren Shaw: “I have always remembered his admonition: ‘Don’t be above making what is needed.’” This statement helps contextualize her lifelong practice of creating garden sculpture, an art that fulfils a utilitarian need and decorative purpose. In her second book, The Quiet Eye: A Way of Looking at Pictures (1982), Judson emphatically connected her Quaker beliefs to her aesthetic practices. She emphasized the term “divine ordinariness,” which she defined as the “delicate balance between the outward and the inward, with freshness and a serene wholeness and respect for all simple first-rate things, which are for all times and all people.”

These principles of simplicity, equality, and inwardness may very well have been applied to the work that we have now come to know as the Bird Girl. The young figure, plainly dressed, holds two bowls in either hand, which could be interpreted as a gesture of weighing and balancing. The overall simplicity of the composition, or its “divine ordinariness,” helps explain its enduring charm; the sculpture reveals very little even after prolonged looking and retains an air of compelling mystery. Originally unassumingly titled “Fountain Figure” (1936), the sculpture stood anonymously in Bonaventure Cemetery until it was featured on the cover of John Berendt’s bestseller Midnight in the Garden of Good and Evil (1994) and the subsequent Clint Eastwood film (1997). 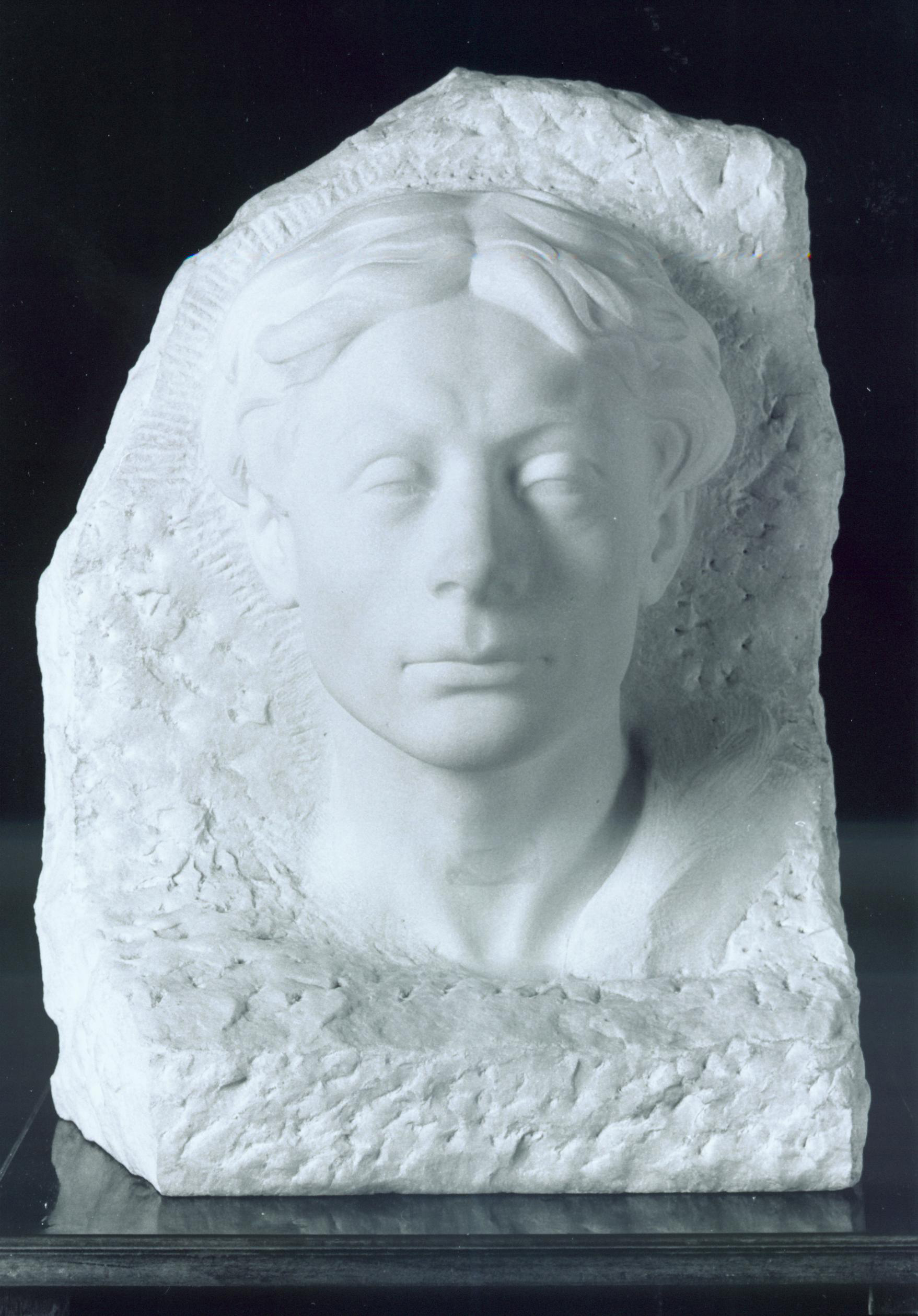 Telfair’s collection also includes sculptures by contemporaries of Judson, such as Malvina Cornell Hoffman. A painter at the beginning of her career, Hoffman eventually turned to sculpture, a medium she privileged for the rest of her life. In the 1930s, the Field Museum in Chicago commissioned her to create over 100 ethnographic portraits. These works were featured in the “Hall of Man,” a 1933 exhibition intended to document the various human races. Displays such as these, which became popular in the mid-19th century, claimed to showcase realistic depictions of so-called exotic people and their racial characteristics. However, the realism in these portraits has since been debated; indeed, these works tended to reflect the artists’ biases and assumptions about the people they depicted. Hoffman’s John Keats (1957), in Telfair’s collection, represents a highly idealized image of the English poet who died prematurely of tuberculosis. His head and neck, which emerge from the white marble block, reveal delicate features perhaps meant to indicate the romantic author’s sensitivity. Looking closely around the head, the viewer also notices striations that create a distinct white halo, emphasizing Keats’ martyrdom. 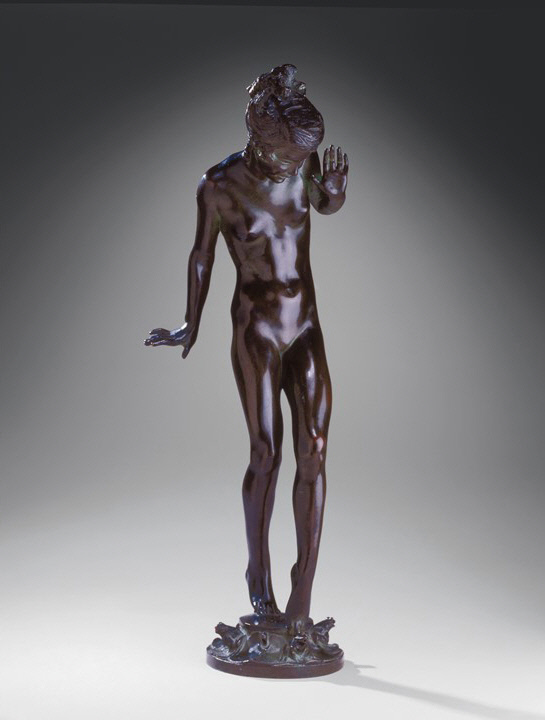 Another Judson contemporary was the sculptor Harriet Whitney Frishmuth, who produced Playdays (1925), a bronze sculpture of a nude woman caught in mid-movement, also part of Telfair’s holdings. Frishmuth often used real dancers as models, as she valued their athleticism and ability to hold a pose for extended periods of time. Like Judson, Huntington, and Hoffman, Frishmuth worked in the genre of figurative sculpture. Her work was heavily sought after by clients seeking to decorate large estate gardens. It should come as no surprise then that the Brookgreen Gardens would also acquire sculptures by Hoffman and Frishmuth in 1935.