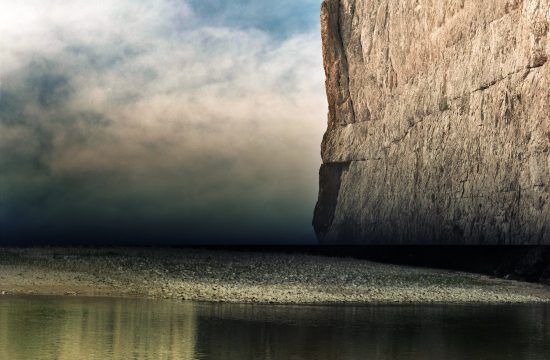 Source to Sea: Ansley West Rivers is a solo #art912 exhibition with Ansley West Rivers (American, b. 1983) focused on her Seven Rivers photographic series. Beginning in 2013, Rivers gave herself an assignment to photograph seven rivers—from source to sea—across the United States. She selected the Colorado, Missouri/Mississippi, Columbia, Rio Grande, Tuolumne, Altamaha, and Hudson rivers, as they represent watersheds for major metropolitan regions and cities throughout the country.

Susan Laney of Laney Contemporary Fine Art introduced me and Rachel Reese, Curator of Modern and Contemporary Art (and co-curator of Source to Sea), to Rivers’ photographs in the spring of 2017. That April, we visited her studio on the property that comprises Canewater Farm, a business she owns and operates with her husband, Rafe. The farm and studio sit on the banks of two tidal waterways, Knox Creek and the Carneghan River. That visit helped solidify the importance of the landscape and water in Rivers’ photographs. It became apparent how water has always been a theme running through Rivers’ life (even down to her very apropos last name!). From her family trips as a child to Lake Burton, a reservoir owned by Georgia Power, to her years as a graduate student in drought-ridden California, and from her life-changing journey rafting down the Colorado River in the Grand Canyon to her current life on a South Georgia marsh growing food, her life experiences and artistic vision were and continue to be shaped by water.

Through her art, Rivers offers a vision of the state of water now and how we can envision a future of sustainability and conservation. Her ethereal photographs draw the viewer in with beauty and hopefully ignite a desire to save what is being threatened. Telfair Museums ultimately chose Rivers to be an #art912 artist at the Jepson Center because, in addition to her contributions as an artist to Savannah, we believe her voice will resonate for future generations within the larger American fabric. Her perspective brings to the forefront conversations about issues that affect us all.