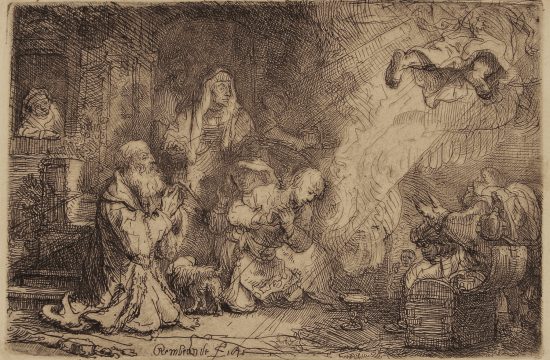 See it at the Jepson Center Rembrandt and the Jewish Experience: The Berger Print Collection March 15 – to June 30, 2019 Jepson Center

Few names from the canon of Western art history are as iconic as that of Rembrandt van Rijn (Dutch, 1606–1669). Rembrandt is the best known artist to emerge from the Dutch Golden Age of the 17th century, a period of economic growth and artistic achievement unmatched in the long history of the Netherlands. During his lifetime, he saw Amsterdam quadruple in population and geographical size to become one of Europe’s wealthiest and most vibrant cities. Amsterdam was also noted for its welcoming spirit toward immigrants, particularly the Sephardic Jews who had been expelled from Spain and Portugal during the Inquisition.

The impact of Judaism on the life and work of Rembrandt is a remarkable and multifaceted story. Rembrandt was born into a Christian household (his father was Dutch Calvinist and his mother was Roman Catholic) and never formally joined any church, yet he was an astute student of the Bible. Rembrandt turned to Jewish theologians for insight into his depictions of imagery from the Old Testament. He also hired models from the Jewish community and received commissions from Jewish patrons. Rembrandt boldly broke with long-established ways of depicting Old Testament stories by adding emotional and psychological depth to his subjects through expressive faces, dramatic body language, and bold use of shadow and light. The timelessness of the emotions conveyed in Rembrandt’s etchings allow his works to resonate with us today as profoundly as they did with his contemporaries in the 17th century.

This body of work is particularly relevant here in Savannah, which is home to one of the oldest Jewish communities in the United States. Sixty-four years after Rembrandt died, the first Jewish settlers arrived here. It was 1733, only a few months after the city was founded by James Edward Oglethorpe. These settlers fled from Europe to Georgia to escape the persecution and discrimination that drove so many Jews to settle in Amsterdam just a few decades earlier, during Rembrandt’s lifetime.

These works are not only fascinating due to their subject matter, but also because of the technical skill required to produce them. Like most old master prints, they are small in size and possess a tremendous amount of detail on a small surface area. Rembrandt’s prints were created entirely in the medium of etching and the related techniques of drypoint and engraving. These are forms of intaglio printing, in which the ink is forced into grooves below the surface of the printing plate and transferred under pressure to a piece of printmaking paper. Etchings and other intaglio prints can be identified by the distinctive plate mark or indentation in the paper created around the image by the press.

Rembrandt also used the drypoint method, in which the artist scratches directly into the plate with a drypoint needle. The needle leaves a metal residue or burr around the edges of the marks, which makes lines softer-edged and darker in the print. Another tool used by Rembrandt was the engraver’s burin, which cuts a cleaner, v-shaped trench into the plate.

Despite so many other advances in technology since the 17th century, printmaking tools used by artists today are still very much like the ones Rembrandt would have used to create his prints.

An Intaglio Technician demonstrates how Rembrandt would have made his etchings. Film made by Matthew Harrison & Norwich Castle Art Gallery & Museum.