Jason Hewitt, Historical Interpreter, dissects the political career of U.S. Congressman George W. Owens of Savannah, Georgia. Owens purchased the home that is now the Owens-Thomas House & Slave Quarters, operated by Telfair Museums, in 1830. This series will illuminate the ways in which Owens used his political position to further solidify power for white southern landholders in the 1830s, including mounting barriers to the abolition of slavery and speeding forced removals of indigenous people in the United States.

Upon his arrival in Washington, DC, George W. Owens wrote to his wife, Sarah, in Savannah on December 3, 1835:

“I fear my friends in Georgia will expect far more than I can perform […] I find an expectation has preceded me here which I shall not be able to sustain.”

Owens’s doubts were warranted. Although he had served as an elected official in his home state, as mayor of Savannah and at the State House in Milledgeville, this was the first time Owens would tackle issues of national importance.

Figure 1. The earliest known photographic image of the U.S. Capitol, taken in 1846. The capitol as it appeared during George Owens’ time in Congress, before the addition of the new larger dome and the current House and Senate Chambers.

As Owens took his seat as a member of the 24th U.S. Congress, debates over slavery and conflicts with Native Americans were coming to a head. Sectional tensions were rising as the country rapidly expanded westward. New political fault lines were also beginning to emerge as the rise of the Whig party threatened the dominance of the Democratic establishment, of which Owens was a member, led by followers of President Andrew Jackson. The stage was set for a tumultuous legislative session. 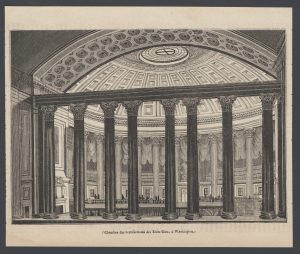 Fellow Jacksonian Democrat James K. Polk of Tennessee presided as Speaker of the House. As visitors to the Owens-Thomas House know, Polk was a guest of the Owens family at their home in Savannah after concluding his term as president 10 years later in 1849. Polk was a key ally as former chairman of the powerful Ways and Means Committee, the primary tax-writing authority in Congress with control over revenue, appropriations, and all manner of financial legislation. George Owens was appointed to the committee just months before a financial crisis would rock the banking system and sink the country into an economic recession. 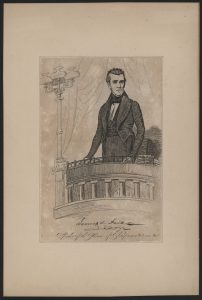 Across the aisle was Massachusetts representative and former president John Quincy Adams, the primary voice of opposition against the Democratic majority. In the years to come, Adams would repeatedly spar with Owens and his Democratic colleagues over the abolition of slavery, eventually leading to the first gag rule in Congress. Owens’s feelings of intimidation in a room filled with veteran legislators like Polk and Adams, and amid multiple national crises, is unsurprising. 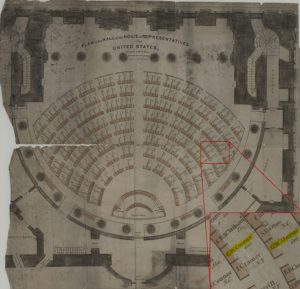 Figure 4. House Chamber Seating Plan, David H. Burr and John Van Ness Throop, 1836-1837, Collection of the U.S. House of Representatives. This seating chart shows a duplicate for the position of George Owens’s desk in the House Chamber. Also noteworthy is the unusual configuration of the room. From 1833 to 1838 the desks were arranged backwards in a failed effort to address the room’s poor acoustics.

Despite the daunting prospects that Owens faced during his four years in the House of Representatives, he still managed to wield his political influence in promoting his own self-interests by ensuring the socio-economic power of his wealthy white constituents in Georgia and furthering the subjugation and oppression of Black and indigenous residents of the state.

In this series we will examine the events that dominated political discourse during Owens’s time in Congress and the policies that he endorsed, to varying degrees of success, during an era of increasing tension and uncertainty.