The furnishings in the Owens-Thomas House & Slave Quarters have stories to tell about their original and subsequent owners. On permanent display in the formal dining room, this magnificent dining table and set of 12 high-style side chairs once graced the home of Dr. James Proctor Screven and his family, which was located on the southeast corner of Abercorn and Congress streets in the spot now occupied by the Lucas Theatre.

James Proctor Screven was born on October 11, 1799 near Bluffton, South Carolina, the oldest son of Hannah Proctor and Major John Screven, owner of rice plantations in Georgia and South Carolina and Major of the 2nd Battalion of Militia at Savannah.

Young Screven began his education with Dr. Moses Waddell at Willington, near Abbeville, S.C., and graduated in 1817 from South Carolina College in Columbia. He studied medicine in Savannah under Dr. William R. Waring and received his medical diploma in 1820 from the Jefferson Medical College, University of Pennsylvania in Philadelphia. He studied further in London and Paris (there becoming acquainted with Lafayette).

While a practicing physician in Savannah, Screven served as the city’s first health officer and worked to promote the “dry culture” method of rice planting in order to affect the mosquito-driven disease then prevalent in the area.

In 1824, as Savannah prepared for the visit of Revolutionary War hero the Marquis de Lafayette, he served on the Greene/Pulaski monument committee along with Alexander Telfair and Richard W. Habersham, among others. He married his cousin Hannah Georgia Bryan in 1826.

The 1830 census shows that he enslaved 62 people to work for him on the family rice plantation in St. Peters Parish, Beaufort, South Carolina. Early in

the 1830s Screven gave up his medical practice and moved his wife and two children, John (b.1827) and Ada (b.1831), to the Bryan plantation, Nonchalance, on Wilmington Island. There the Screvens supervised rice production, had two more children, Thomas (b.1834) and George (b.1839), and enlarged their landholdings and slaveholdings by purchasing four more plantations.

By 1848, the family had returned to Savannah and Screven was elected an alderman for multiple terms and then mayor in 1856. He moved on to the Georgia Senate and used his influence there to inaugurate the Savannah, Albany & Gulf Railway. He served as president of that company until his death in 1859.

The Screvens’ great-granddaughter Maude Bryan Foote (1889-1974) never lived in Savannah but had been raised with a familiarity of the history of her ancestors. She and her partner Mary Letitia Sproul had a home in Buckfield, Maine. Their home contained the fabulous extension table and 12 classically-inspired dining chairs which had once graced the Savannah home of Dr. and Mrs. James Proctor Screven. In 1958, when the ladies began to think about “downsizing” their home, Miss Foote knew that her table and chairs needed to come home to Savannah, and she believed the Owens-Thomas House was the appropriate spot for their display.

The Owens-Thomas House dining room was referred to in an 1822 inventory as “Drawing Room North.” In early 19th century American homes, rooms served many different purposes. A dining room would not be used only for formal dining, but also for parties and receptions of various sizes. Furniture for these multipurpose spaces was designed to be versatile, with removable leaves to be added or subtracted according to the occasion and brass casters beneath each foot to enable the heavy piece to be moved to the side of the room for dancing or an arrangement of chairs for a musical concert.

Constructed of mahogany and subtly decorated with low-relief reeding and rosettes, the fine workmanship of this table suggests that it may be attributed to one of the first-class Philadelphia cabinetmakers such as Henry Connelly (active 1801-1823) or Joseph B. Barry (1757–1838) whose goods were sold to Savannah families. 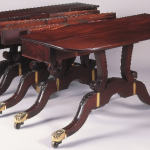 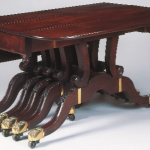 Five sets of scrolled supports are mounted on curule-style legs, each with a carved acanthus leaf and brass-capped feet embossed with eagles and set atop castors. The table expands to include five leaves with brass clamps to secure the leaves.

A diamond-shaped accordion-fold mechanism facilitates expansion or contraction as needed. Mechanisms of this type were patented between 1800 and 1810, and examples were advertised in Savannah as early as 1817. 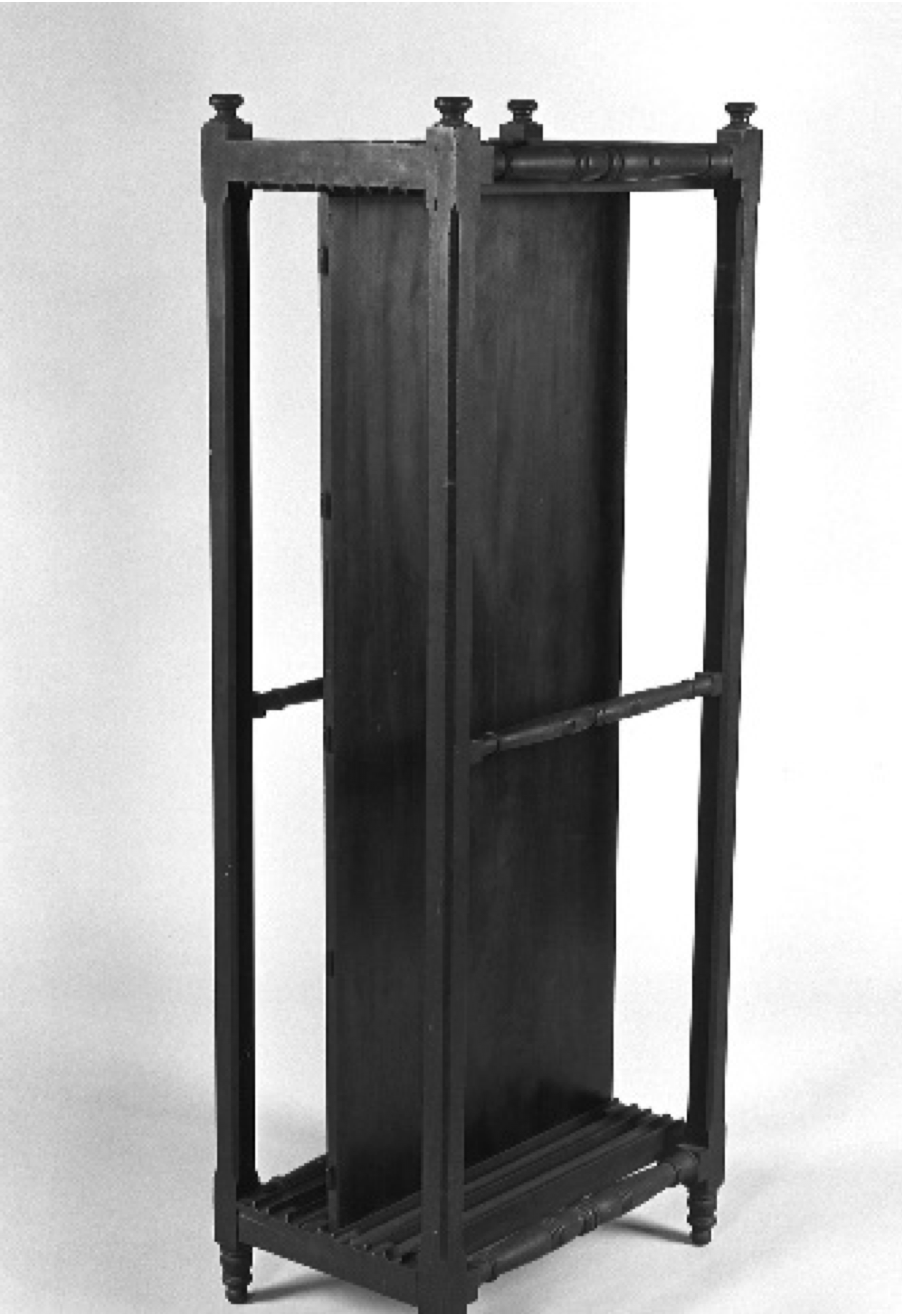 The extra leaves are stored vertically in a special mahogany case. Made to hold five leaves, the case consists of four carved and turned vertical supports, a rectangular top and bottom, each with five grooves into which the leaves slide, and two medial turned braces.

Fully extended with all five leaves, the table seats 20.

The 12 chairs, c.1815, that the Screven family used in their dining room are mahogany in the Greek klismos form with saber legs that sweep into curving stiles, ornamental pierced splats, and shaped backs. They have horsehair-upholstered seats. The shallow carving and shaped crest rail are both features that point to Philadelphia origins.

Sets of mahogany dining chairs were extremely rare in Savannah in the first quarter of the 19th century, when painted “fancy chairs” were popular. (A fancy chair was light and portable, often painted black with decorative gold stencils, and with a rush or cane seat.) In Savannah household inventories of the period, only eight sets of mahogany chairs are noted. The Telfairs and the Richardsons (original owners of the Owens-Thomas House) were two of those households.

Misses Foote and Spoul really did know their Savannah history, and today we remain grateful for their patronage of Telfair Museums! 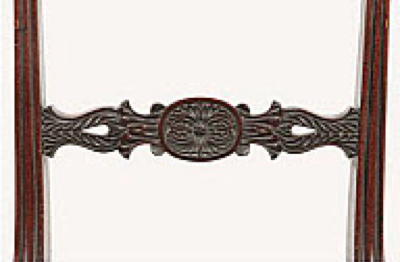