Telfair Museums is excited to offer local Chatham County artists an opportunity to feature their art in the Jepson Center! The call to artists seeks entries for Boxed In/Break Out, a museum-sponsored public art installation at Telfair Museums that involves activating six windows at the Jepson Center that face Barnard Street. The artist chosen would have a detailed plan for how to utilize all six windows in a cohesive manner through self-created art that fulfills the following criteria: creativity, originality, feasibility, visual appeal, as well as resourcefulness and suitability in the space. The project will be displayed from April 12-October 27, 2019.

Boxed In/Break Out is intended to highlight and provide an exhibition opportunity for the work of a local artist through public display, promotional materials, and an artist talk. In addition to museum-sponsored promotion, the artist will receive a $1,000 honorarium.

Boxed In/Break Out is part of Telfair Museums’ #art912 initiative, which is dedicated to raising the visibility and promoting the vitality of artists living and working in Savannah.

Eligibility:
Must be at least 18 years old and be a resident of Chatham County (proof of residence will be required if selected)

Artists applying are encouraged to stop by the museum and examine the space from Barnard Street (currently the windows feature last year’s winning submission). Boxed In/Break Out will utilize the six windows closest to the Jepson Center’s Oglethorpe entrance (the windows on the other side of the lane are used for the museum gift shop display). One window may be used for a text panel or banner describing the project if the artist would like that as a feature.

The window space at the Jepson is unable to be climate controlled. It is daily exposed to direct sunlight. Each window space is accessed through two door panels on the interior of the Jepson Center that open into a hallway. Electricity is limited. Two of the windows have outlets inside, and there is an additional outlet in the interior hallway from which the windows are accessed. Each window has a fluorescent light bulb at the top lighting the space that will be available to illuminate the installation during the workday and at night.

Site visits are encouraged! Contact Erin Dunn, Assistant Curator at dunne@telfair.org or 912.790.8842 to schedule a visit.

Window Dimensions:
95” high x 63 ½”wide x 13” deep. The panels at the back of the windows must be able to close to adhere to fire code.

Installation:
Artists are responsible for the installation of their work in consultation with the museum’s registrar/collections manager.

Exhibition Dates:
The project will be displayed from April 12 to October 27, 2019.

Ceremony:
Artist must be present for an artist talk in the Jepson Center on Thursday, April 18, 2019 at 6pm.

*Incomplete proposals will not be considered

The winning proposal will be selected by a guest curator Chad Alligood. Proposals will be evaluated based on the following criteria: Creativity and originality, feasibility, resourcefulness and suitability in the space, as well as visual appeal. 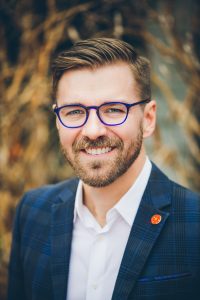 Chad Alligood is an independent curator and art historian of modern and contemporary American art. Previously, he served as Virginia Steele Scott Chief Curator of American Art at The Huntington, overseeing the collection and exhibition of American art. Prior to that, as curator at the Crystal Bridges Museum of American Art in Bentonville, Arkansas, he significantly expanded the diversity of the collection and led the reinstallation of the postwar permanent collection galleries. He also spearheaded multiple exhibition projects, including State of the Art: Discovering American Art Now, which garnered Excellence in Exhibition honors from the American Alliance of Museums in 2015. His research for State of the Art took him to nearly 1,000 artists’ studios across the country. Born and raised in Perry, Georgia, Alligood earned his BA in the History of Art and Architecture from Harvard University, his MA in Art History from the University of Georgia, and has completed his PhD coursework in art history at the Graduate Center of the City University of New York (CUNY). Alligood taught art history at Brooklyn College, received the Kress Foundation Fellowship through the Smith College Institute for Art Museum Studies, and held the Graham Collections Fellowship at Cranbrook Art Museum.

*The guest curator no affiliation to the Chatham County area.

If you have any questions regarding the proposal guidelines, contact: Erin Dunn, Assistant Curator, 912.790.8842, dunne@telfair.org

I live outside of Chatham County. Am I still eligible to apply?

No, this opportunity is available only to Chatham County residents. If you are selected, you will be asked for proof of residence and it is desirable that you remain a resident of Chatham County throughout the run of the installation.

Is there an age limit?

You must be 18 years or older to submit your work.

Do you have to be a professional artist?

Am I allowed to have assistance for installation purposes?

You are allowed to have help with your installation, but will not receive additional funds to reimburse helpers. You will also be required to provide names and background information for additional help.

How are the windows accessed?

The windows are accessed through the interior of the Jepson Center. Each window has two large door panels that open outwards into the hallway behind.

Can I do a site visit?

Can the doors be left open to allow more room for the installation?

No, the doors must be able to be shut to adhere to the fire code.

How do I apply?

Submit an email proposal to dunne@telfair.org by 5pm on Friday, January 18 with the subject line Boxed In/Break Out. Late and/or incomplete entries will not be considered.

Can I submit more than one proposal?

Yes, you may submit up to three proposals for Boxed In/Break Out.

Who will decide the winning submission?

The winning submission will be decided by a guest curator.

How long will the project be up?

Am I responsible for deinstallation?

Yes, you will be responsible for taking your materials down after October 27, 2019. If the work is not removed by October 31, 2019, the materials will be disposed of.

What does it cost to send in a proposal?

There is no application fee.

Is there material reimbursement?

No, there will be no material reimbursement.

What mediums are accepted?

Most mediums will be accepted excluding live animals, live plants, or performance.

Will I receive an email informing if my piece has been selected?

You will receive an email indicating that your application has been received. The winner of the project will be informed by an email by Monday, February 11, 2019 at the latest. Unsuccessful applicants will not be notified.

I still have questions.

Disclaimer:
Telfair Museums reserves the right to refuse any or all submissions, and/or to withhold the honorarium should it be determined that submissions are not adequate.