One of Savannah’s favorite art icons, Sylvia Shaw Judson’s Bird Girl sculpture, is practicing social distance at the Telfair Academy while the museum is temporarily closed, but you can still draw inspiration from her old haunt. At the time of this writing, Savannahians have been asked to shelter in place, so you may not be able to visit Bonaventure Cemetery in person, but there are many ways to explore the art and history of this famous cemetery from the comfort of your home. For more than 150 years, Bonaventure has inspired artists of all stripes, as documented in Telfair’s

exhibition Before Midnight: Bonaventure and the Bird Girl. At home you can explore images and stories of the intriguing history and rich artistic legacy that make Bonaventure special to Savannahians and admirers around the world. Here are a few puzzlers to get you started. 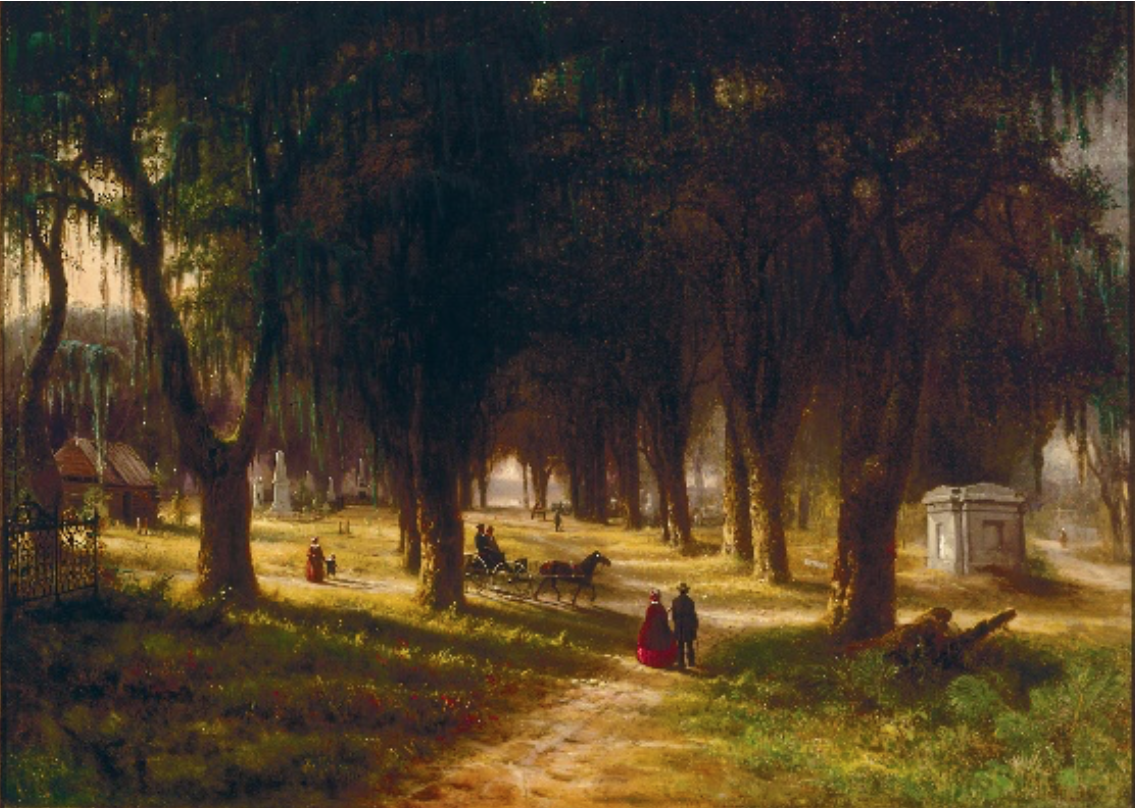 What’s in a Picture?

This early view of Bonaventure shows the cemetery as it existed in 1860, or does it? If you look for this view at Bonaventure you won’t find it because artist Henry Cleenewerck rearranged landmarks to fit in the same view. The obelisks of the first cemetery at Bonaventure, the Tattnall family plot, are seen in the background on the left side of the painting. The Clinch mausoleum, shown on the painting’s right side is still there, but not visible from this view. If we look through the trees at the center, we see the
Wilmington River. Strangely, the original, rustic arched wooden entrance gate to the cemetery shows up in the far right background. If this were the case in reality, the entrance would be in the river! 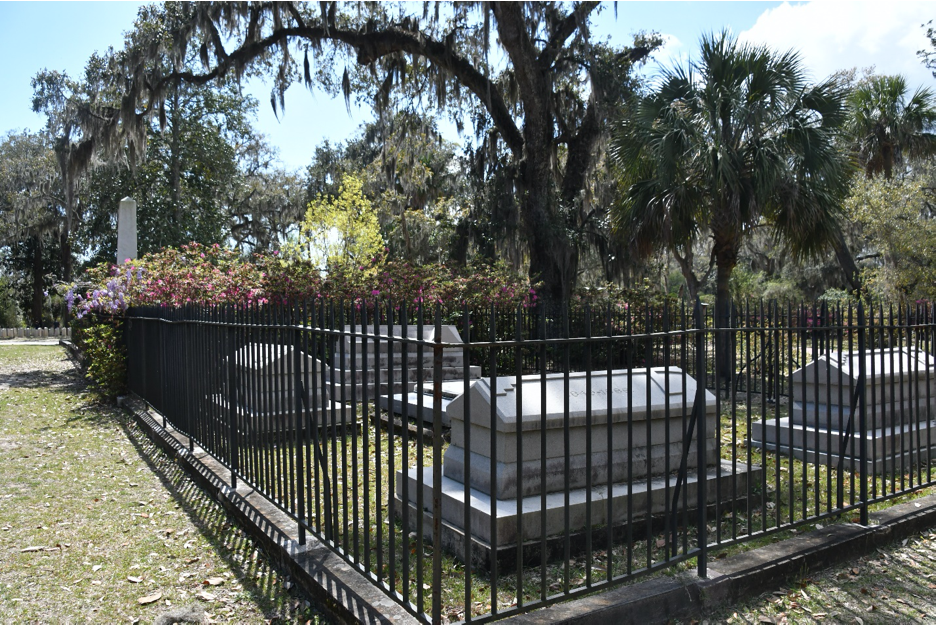 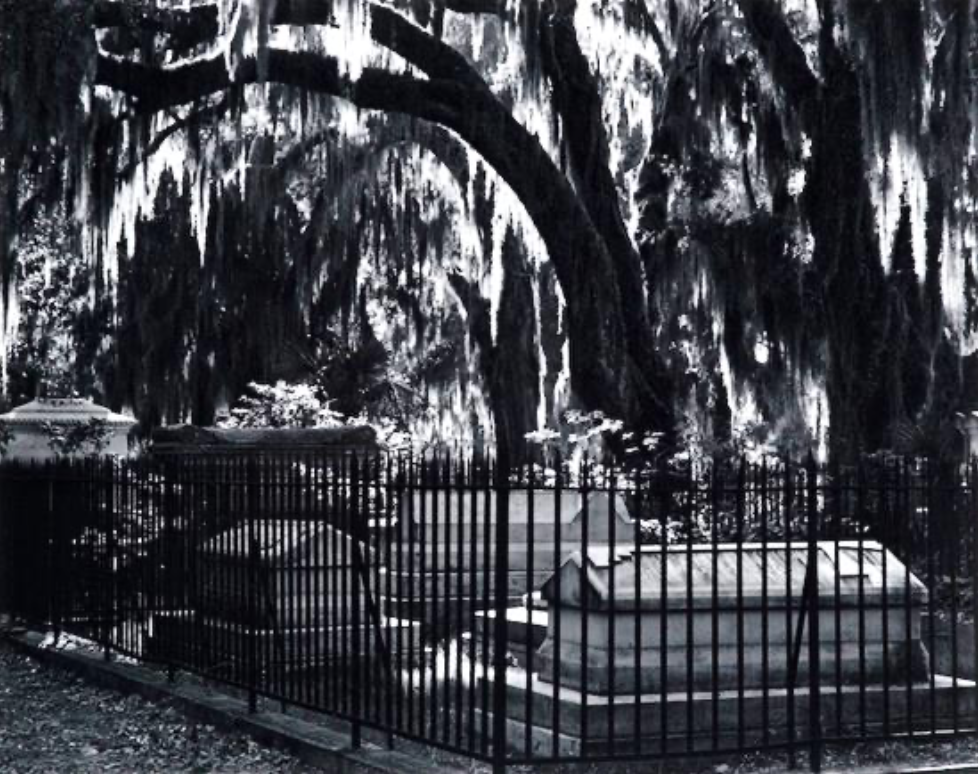 In 1941 noted American photographer Edward Weston set out across the United States to record images for an illustrated edition of Walt Whitman’s classic Leaves of Grass. In Savannah he stopped at Bonaventure, photographing a view down a path leading to the tomb of museum founder Mary Telfair and family (visible far left of image). At the cemetery today you can see the same view that Weston captured, but where is the Telfair tomb? Answer: behind a large azalea.

How many John Walz sculptures are in Bonaventure? 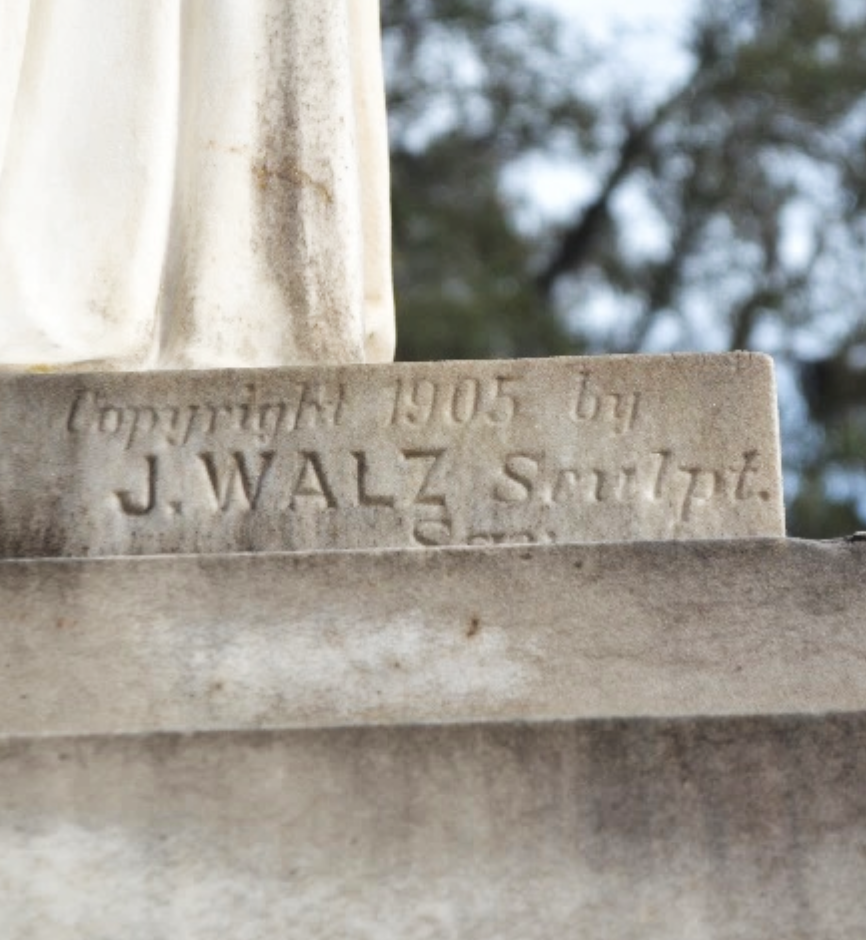 German-born sculptor John Walz, best known for his beloved sculpture of young Gracie Watson, first came to Savannah to install five sculptures in front of the Telfair Academy in the 1880s. Walz and his business made more than 70 monuments large and small for Bonaventure. His beautiful Dieter monument has caught the eye of many an artist, but a quick web search will reveal Walz signatures on many a monument in Bonaventure.

Bonaventure’s monuments are more than artistic memorials to the deceased. Many are chock full of symbols that seem strange today (upside-down torches, weeping willow trees, etc.), but carried meaning for the families that placed these stones. In Maria Von Matthiessen’s 1999 photograph, Crowning Glory Hairdo, a model poses beneath one of Bonaventure’s monuments. Her crownlike hairdo echoes the image on the headstone of a crown being lowered by a pair of hands from heaven. This is a great starting point for an exploration of symbols in 19th-century cemeteries. Lillies, lambs and doves were popular symbols on nineteenth century headstones but these are just the tip of the iceberg. What does a broken column mean? A tree trunk? A pair of hands (male and female) shaking? Happy hunting!

Where’s the Bird Girl?
She’s practicing social distancing during the COVID-19 threat, of course! The popular sculpture once placed at Bonaventure has been on loan to Telfair Museums since the 1990s. Created by Sylvia Shaw Judson in 1936 as a garden figure, six casts of Bird Girl were made (one in lead, five in bronze). One bronze cast made its way to Bonaventure and later became the subject of Jack Leigh’s photograph Midnight, Bonaventure Cemetery. The photograph was 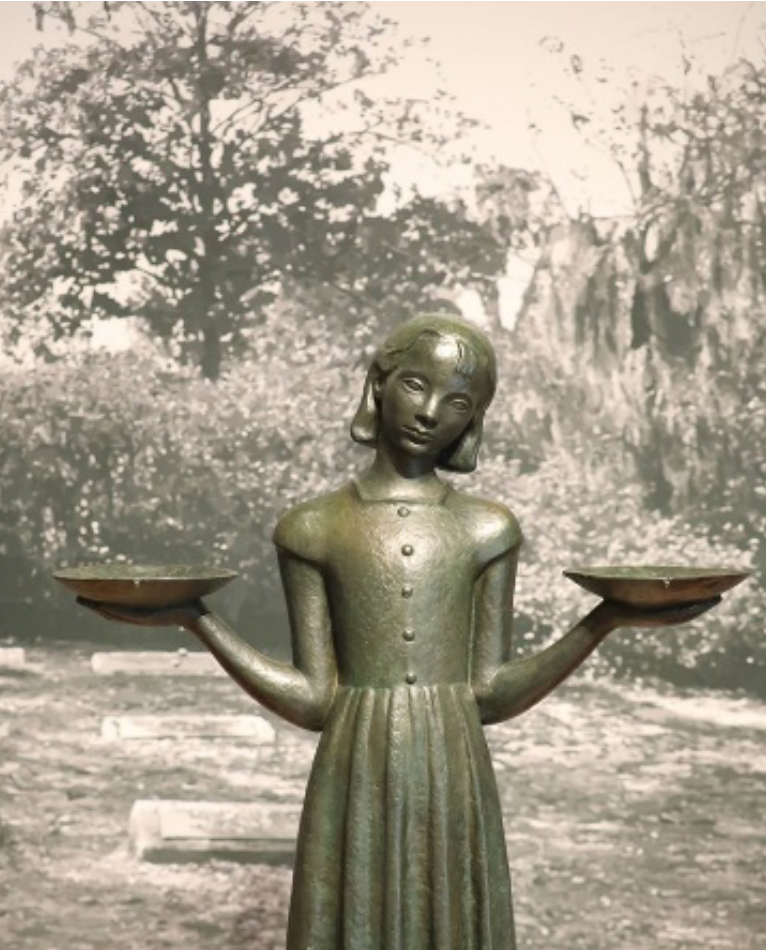 used for the cover of John Berendt’s bestseller Midnight in the Garden of Good and Evil. You can see her online in Jack Leigh’s famous photograph for now, and visit her in the Before Midnight exhibition when we reopen!

Explore the Bird Girl and Bonaventure from home in Telfair Museums’ collections, stories and lectures, as well as books and movies!

Stories:
Bonaventure: A Historical Sketch
Monument Makers of Bonaventure
On the Trail of the Bird Girl