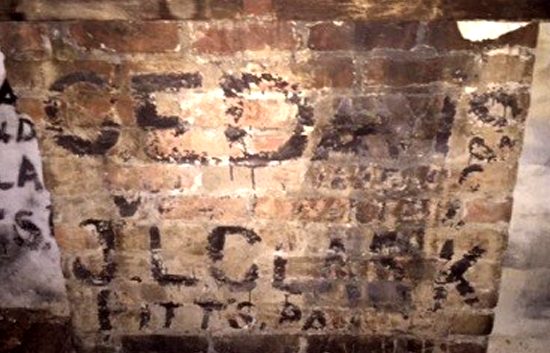 In our last episode, Shannon Browning-Mullis, Curator of History and Decorative Arts (that’s me), and Sonja Wallen, Buildings Curator, found mysterious 19th century graffiti and evidence of living spaces in the attic of the slave quarters. In this installation, we explore the dusty chambers off the basement cistern.

When the original plumbing system of the Owens-Thomas House was still in use, the basement cistern was covered with wooden planks, creating a floor above. Walking across those planks, through a small door, and down a ladder allowed enslaved workers to access the ice chamber, which held 50 pound blocks of ice imported from Boston packed in straw and sawdust to slow melting. To access the chamber today, we must climb a ladder placed inside the cistern, sit on the rim of the ice chamber to lift the ladder through the small door, and then down into the chamber itself.

The chamber is approximately 10’ x 10’ with an arched brick ceiling. When our reinterpretation project is complete, visitors will be able to peer into the chamber and imagine how it once functioned.

Once we climbed out of the chamber and closed the wooden trap door covering it, we continued further into the space beyond the ice chamber entrance.

This small chamber is visible from the basement’s center hall and measures approximately 5’ x 5’ with a ceiling that’s about three feet tall, necessitating a semi-crawl through the space. Finally, we reached the small window located under the front entry stairs on Abercorn Street.

From this spot proceeding in either direction requires sliding through narrow passages and crouching through short openings under the stairs. The stone and brick arches are reminiscent of ancient Roman architecture. Finally, much covered in centuries of dust and greeted by hundreds of arachnids, we found what we had been looking for. This inscription was created when the house was built. It reads, “John Retan Began Nov 1816 Finished Jan 1819.” Just who was this John Retan and what did he have to do with the Owens-Thomas House? Look for our next blog post in August to find out!

Not on our email list? Sign up now to be the first to hear about new discoveries at our historic sites!