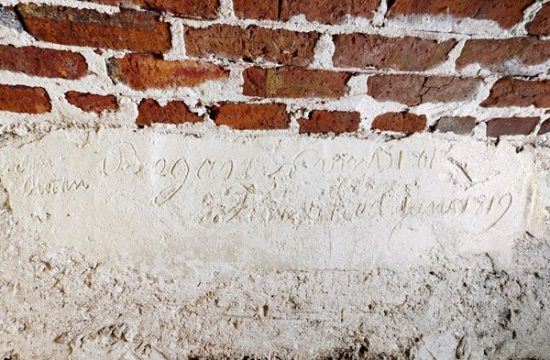 These are exciting times at the Owens-Thomas House! A couple weeks ago, buildings curator Sonja Wallen and I were working on plans for the reinterpretation project on the second floor of the Owens-Thomas House Slave Quarters. While inspecting the space, we noticed evidence indicating that an additional set of stairs ascended into the attic. We quickly fetched a ladder to see what we could see. What we found changed my understanding of how the space was used in the 19th century.

The first thing we noticed as the light from our flashlights hit the space was graffiti from 1895. Who were CE Davis and JL Clark? Only more research will tell. The space also contained original wooden pegs, rafters that still contain the roman numerals used to organize construction, and whitewash on some boards.

The whitewash, more than anything else, indicates that this space was likely used as living quarters. The use of attic spaces as living quarters for the enslaved was quite common in Savannah in the early 19th century. In that regard, this is not groundbreaking news, but it does make us reconsider the division of space among the enslaved people who lived on this site.